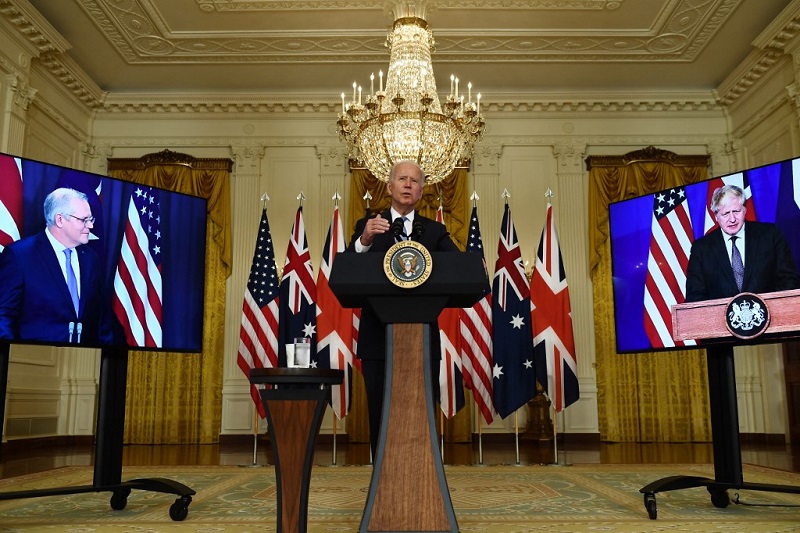 future of aukus failed pact or chances of revival

Australia – In September, a new alliance was launched with a drumroll and much fanfare. AUKUS alliance between the United States, United Kingdom, and Australia was formed to tackle China’s growing dominance in the Indo-Pacific region. Additionally, Australia was elevated to a significant position of regional military power, while Britain received a tilt in the region. But the “ruckus” AUKUS failed to fly up high as was anticipated, but at the same time, it did not collapse on the launchpad.

The biggest failure of AUKUS right at the launch was enraging France. It strangled the three-decades-long relationships between Australia and France as the “deal of the century” was ditched by Canberra – A$90bn (£48.5bn) contract to purchase 12 diesel-powered submarines from France was canceled for buying eight nuclear-propelled submarines from the US and Britain. It also brought US President Joe Biden to an embarrassing position where he had to apologize to Macron for the “dubious” deal, raising questions about how well oiled and functioning is Biden administration.

The pact has, to some extent, fractured alliances with players in the Indo-Pacific region like New Zealand, India, Indonesia, and Malaysia. The raised concern among the regional nations is around arms race loopholes in the nuclear non-proliferation treaty.

AUKUS has dented the global and diplomatic image of Biden as well as Australian Prime Minister Scott Morrison. Controversial and criticized way of handling deal cancellation with France has landed Morrison in deep troubles internally. Biden, on other hand, relayed that he was misinformed about France being informed by the deal cancellation with Australia proves two points – either he was trying to rescue himself from further embarrassment in front of Macron, or he was kept out of the loop by his own administration.

One thing is evidently clear – while the countries part of the AUKUS alliance are trapped in diplomatic chaos, China’s regional presence is constantly growing. Admiral Pierre Vandier, chief of staff of the French navy said, “We are witnessing the Chinese naval awakening. The size of the Chinese navy increased by 138% between 2008 and 2030. My predecessor estimated that China launched the equivalent of our national fleet every four years. The simple Chinese coastguard patrol boats are in fact real first-rate frigates.

They are 10,000-tonne boats – their size is larger than that of our frigates of the same size – armed with cannons. Their mission is to escort the fishing fleets and are even authorized to open fire since the modification of its naval law.” This brings the prime purpose of the AUKUS alliance in jeopardy and under scrutiny. It might be the right time for AUKUS powers to awaken while in the initial pod of the pact and work towards strengthening bonds with other Asian powers as well as the European Union if they truly want to succeed in tackling China’s presence rather than strangling themselves in further diplomatic chaos.