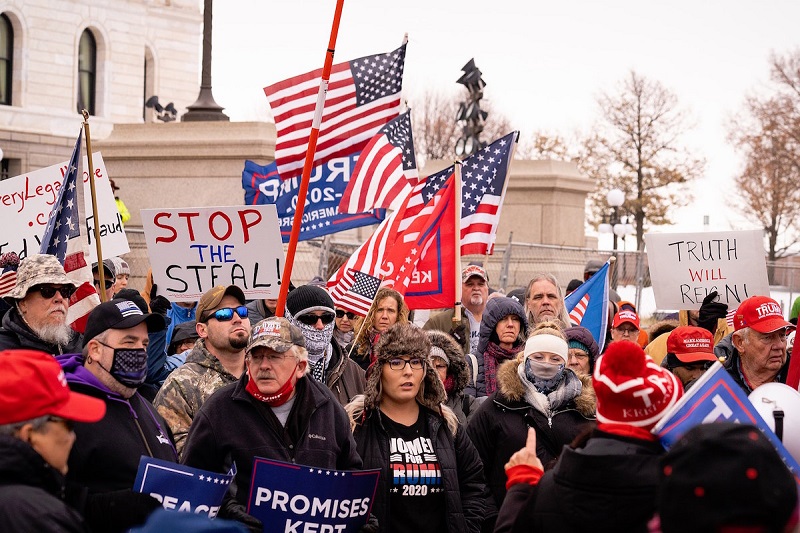 the us classified in the list of declining democracies

US – The United States, for the first time ranks in the annual list of declining democracies, the international think tank IDEA said, noting a “clear decline” that began in 2019. Globally, more than one in four people live in a declining democracy, a proportion that rises to more than two in three with the addition of authoritarian or “hybrid” regimes, according to the International Institute for Democracy and election assistance based in Stockholm.

“This year, we codified the United States for the first time as a decline, but our data indicate that the cycle of decline began at least in 2019,” he said in his report. Alexander Hudson, one of the co-authors of the report, said: “The United States is a high-performance democracy and has even improved its performance on impartial governance indicators (corruption and expected execution) in 2020. However, the decline of civil liberties and government oversight suggests there are problems. So, take the basics of democracy seriously.”

“A historic turning point occurred in 2020-2021 when former President Donald Trump questioned the legitimacy of the 2020 election results in the United States,” the report said. Additionally, Hudson noted “a decline in the quality of freedom of association and assembly during the summer 2020 protests” following the killing of George Floyd by police. IDEA bases its assessment on 50 years of democracy indicators in around 160 countries, dividing them into three categories: democracies (including “regressed” ones), “hybrid” governments, and authoritarian regimes.

The organization’s secretary-general, Kevin Casas Zamora, said, “The apparent decline of democracy in the United States, as evidenced by the growing tendency to contest reliable election results, efforts to suppress participation (in elections) and unbridled polarization. It is one of the most worrying developments.” He warned of an indirect effect, noting that “the violent competition in the 2020 elections without any evidence of fraud has been repeated, in various ways, in places as diverse as Myanmar, Peru, and Israel.”

The number of declining democracies has doubled over the past decade, accounting for a quarter of the world’s population. In addition to “established democracies” such as the United States, the list includes EU member states Hungary, Poland, and Slovenia. Two countries that were on the list last year – Ukraine and North Macedonia – were removed this year after their situation improved. Two others, Mali and Serbia, left the list because they were no longer considered democracies.

As Myanmar moved from a democratic to an authoritarian regime, Afghanistan and Mali fell into the previous classification of mixed governments. For the fifth consecutive year, in 2020, many countries moving towards authoritarianism have outnumbered those undergoing democratization. International IDEA expects this trend to continue for 2021. For 2021, according to the group’s mid-term assessment, the world comprises 98 democracies – the lowest number in many years – and 20 mixed governments, including Russia, Morocco, and Turkey, and 47 authoritarian regimes, including China, Saudi Arabia, Ethiopia, and Iran. Adding declining democracies to hybrid and authoritarian states, “we are talking about 70% of the world population,” said Casas Zamora. “It tells you that there is something fundamentally dangerous in the quality of democracy.” The report states that the trend towards democratic erosion has “become more serious and worrying” since the onset of the Covid-19 pandemic.

“Some countries, notably Hungary, India, the Philippines, and the United States, have (imposed) measures that amount to democratic abuses, that is, measures that are disproportionate, illegal, ill-defined, or unrelated to the nature of the emergency” the report states. “The pandemic has certainly accelerated and amplified some of the negative trends, particularly in places where democracy and the rule of law were deteriorating before the pandemic,” said Casas Zamora.