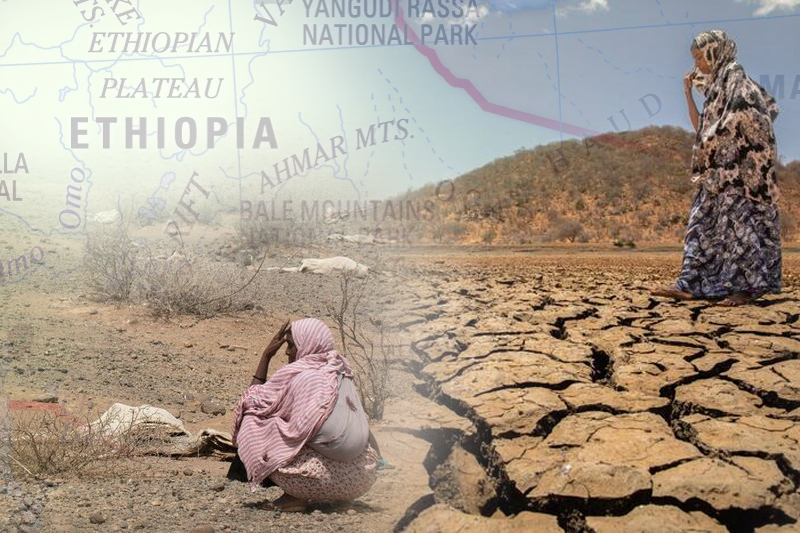 “Ethiopia is facing a very difficult humanitarian situation to say the least,” Stéphane Dujarric told media at UN Headquarters in New York during a regular press briefing. The UN spokesperson said that the unprecedented drought in Ethiopia, the worst in 40 years, coupled with deteriorating extent of malnutrition and ongoing war has brought 17 million people under urgent need of humanitarian assistance.

UN has noted that this year more than 24 million people in Ethiopia have received humanitarian assistance, including food aid for over 20 million, agriculture assistance, and water, sanitation, and hygiene services for more than three million each. At the same time, the UN spokesperson said, “parts of the country face a risk of flooding in the coming weeks and more than 1.7 million people are likely to be impacted, including more than 400,000 men, women and children at risk of displacement.”

.@antonioguterres strongly appeals for an immediate cessation of hostilities in Ethiopia and for the resumption of peace talks between the government and the TPLF. pic.twitter.com/TBnKq8Wp8N

UN Secretary-General Antonio Guterres said that he is “deeply shocked and saddened by the news of the resumption of hostilities in Ethiopia” after months long truce between Ethiopian forces and Tigray’s TPLF was shattered with increased fighting. The UN chief has made a strong appeal for urgent cessation of hostilities in region and the resumption of urgently required peace talks between the Ethiopian government and the Tigray People’s Liberation Front (TPLF). “Ethiopians, Tigrayans, Amharas, Oromos, Afars, have already suffered too much”, Mr. Guterres said expressing his grief.

UN spokesperson said that the UN is “very concerned for the civilians in frontline areas and call on all parties to adhere to their obligations under international humanitarian law to ensure their protection”.

“We condemn any looting or confiscation of humanitarian goods or humanitarian premises, and we call on all parties to uphold their obligations under international humanitarian law and to respect humanitarian personnel, activities, assets and goods”, he added highlighting recent looting of aid that has hampered the humanitarian work in region. Armed men had entered the WFP (World Food Programme) compound in the regional capital, Mekelle, on Wednesday and seized 12 fuel tankers that had recently been purchased.