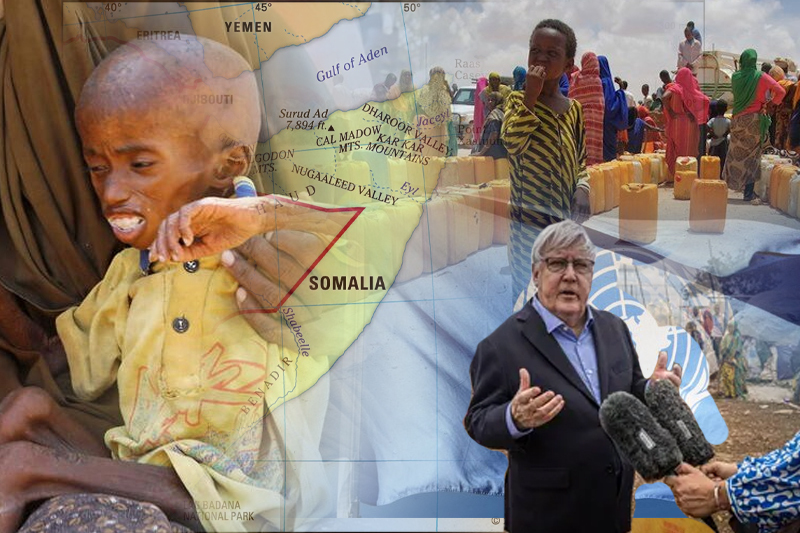 Martin Griffiths, the United Nations humanitarian chief has warned that two areas of Somalia are overlooking a looming famine later this year as the African country is struggling under a catastrophic and unprecedented drought and regional conflicts. Martin Griffiths said the latest food insecurity analysis by the UN has discovered “concrete indications” that famine might hit the Baidoa and Burhakaba districts of south central Somalia during October to December period this year. “Famine is at the door and today we are receiving a final warning,” Griffiths, the UN’s under secretary general for humanitarian affairs, said at a news conference in Mogadishu.

The WFP (World Food Programme) has noted that, despite being able to deliver relief to an unprecedented 3.7 million people and more than 300,000 people being provided with nutrition support, famine is still an imminent reality “unless drastic action is immediately taken”.

“Today, we are in the last minute of the 11th hour to save lives. The clock is running, and it will soon run out,” Griffiths said. Griffiths has marked Baidoa as the epicentre of the crisis. Furthermore, in Banaadir which is near Mogadishu, “medical teams were struggling to keep up with the influx of emaciated children”, he said. “None of the children that I saw at the stabilisation centre in Banadir hospital could smile. Very few could cry. And as we discovered when we left, we had the good fortune to hear a child cry, and we were told that when a child cries, there is a chance of survival.”

Daud Jiran, country director for the aid organisation Mercy Corps, said, “We are burying babies and watching with heartbreak as mothers cry because they don’t know what to feed their children, now dying of hunger and thirst, and drought robs families of crops and livestock, their only source of income.” He added, “It is infuriating that we have once again reached the brink of famine when we have the tools to combat hunger and prevent starvation.”

The last famine in Somalia that was during 2011-12, had killed over a quarter of a million people. The level of humanitarian assistance required is much larger now as compared to the last famine as the country grappling with a devastating drought with predictions to suffer another year of failed rainy season, which would be the fifth consecutive year. Somalia is also struggling amid regional conflict and instability, which are exacerbating hunger and limiting aid supply. According to the Integrated Food Security Phase Classification (IPC), a tracking tool for global hunger, these conditions are most likely to last till at least next year March.