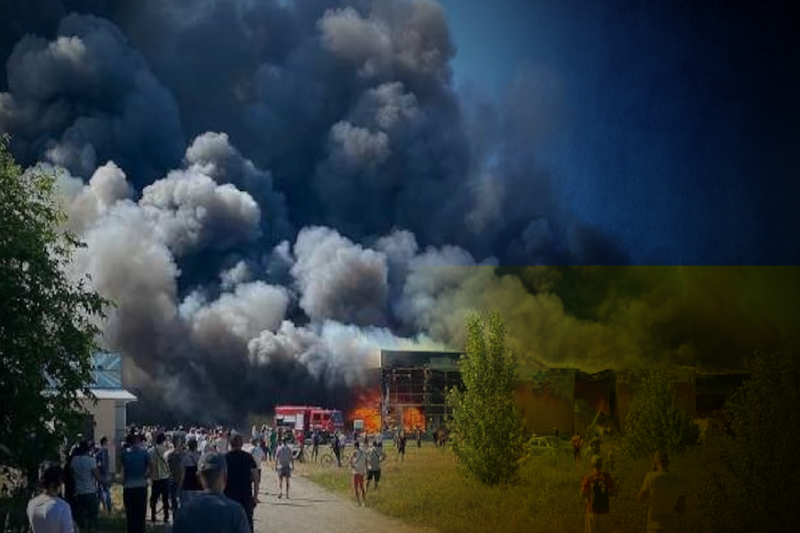 Russian long-range bombers on Monday hit a crowded shopping mall in Ukraine’s central city of Kremenchuk with a missile, killing socres of people who were inside the building at the time of this “abominable” attack. President Volodymyr Zelenskyy of Ukraine have raised fears of an “unimaginable” number of victims in “one of the most daring terrorist attacks in European history.”

Ukraine’s air force command said, “Russia hit the mall, which is located near a railway station, with two X-22 cruise missiles that were fired by an unspecified number of Tu-22M long-range bombers.”

At that time more than 1000 people – shoppers and staff – who were present inside the building managed to escape. But still many are believed to be stuck. Soon the building was engulfed in giant black smoke plumes, dust and flames as the people watched in distress. Emergency crew is at the site to search and rescue any survivors. “We are working to dismantle the construction so that it is possible to get machinery in there since the metal elements are very heavy and big, and disassembling them by hand is impossible,” said Volodymyr Hychkan, an emergency services official.

The attack has been largely condemned by world leaders present at the ongoing G7 summit. In a joint statement, the leaders of the G7 nations have condemned the “abominable attack” and noted these attacks which are aimed at civilians in Ukraine amount to a “war crime”.

“We stand united with Ukraine in mourning the innocent victims of this brutal attack. Indiscriminate attacks on innocent civilians constitute a war crime. Russian president Putin and those responsible will be held to account,” the joint statement said. “Today, we underlined our unwavering support for Ukraine in the face of the Russian aggression, an unjustified war of choice that has been raging for 124 days.”

“We will not rest until Russia ends its cruel and senseless war on Ukraine,” the leaders said adding that they would “continue to provide financial, humanitarian as well as military support for Ukraine, for as long as it takes”.

UN spokesman Stephane Dujarric said, “It is deplorable, to say the least. Any sort of civilian infrastructure, which includes obviously shopping malls, and civilians should never ever be targeted.”

Zelensky wrote on Telegram, “The occupiers fired missiles at the shopping centre, where there were more than a thousand civilians. The mall is on fire, rescuers are extinguishing the fire, the number of victims is unimaginable. Russia continues to take out its impotence on ordinary citizens. It is useless to hope for decency and humanity from Russia.”