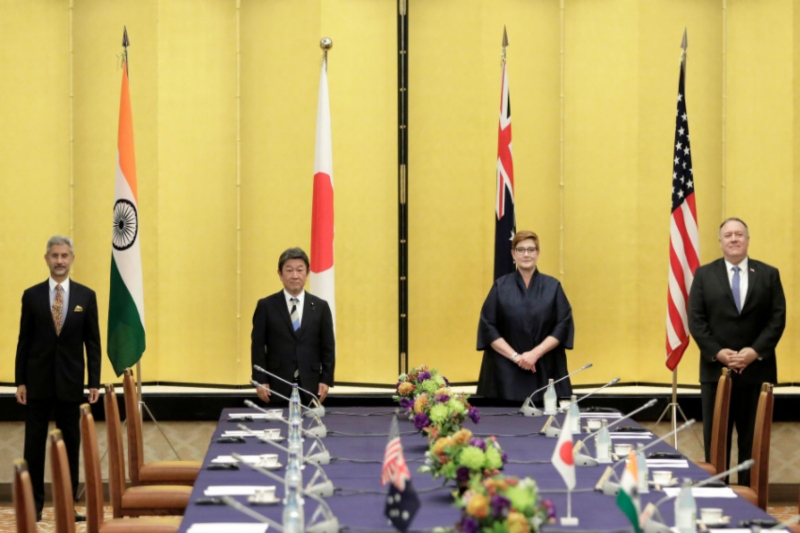 Senior officials from Quad member nations (India, Australia, the United States and Japan) on Thursday held extensive talks to further cooperation in key areas of mutual interest amid China’s increasing assertiveness in the Indo-Pacific region. Officials from the four countries held virtual discussions on strategic challenges, promoting democracy and human rights, and reinforcing the significance of peace and security in the Taiwan Strait.

According to a statement issued by the US State Department, the meeting was a part of regular Quad consultations to “advance a free and open Indo-Pacific region”.

While discussing the ongoing political crisis in Myanmar, officials from the four countries extended Quad’s strong support towards ASEAN centrality.

The Quadrilateral coalition or “Quad” was established by the four nations in November 2017 with the aim of countering Beijing’s aggressive actions in the Indo-Pacific region. Quad’s agenda to unify a multilateral coalition of resistance has posed a grave threat to China’s strategy. Even as Beijing continues to expand its influence in the region, it has been struggling with outlining an effective response to counter the Quad alliance.

In March this year, the Quad held its first leader-level Summit between US President Biden, Australian PM Scott Morrison, Indian PM Narendra Modi, and Japanese Premier Yoshihide Suga. Biden has recognised the Quad grouping as a crucial component of his foreign policy to counter China’s aggression. Earlier this week, the US slammed China over its “unlawful territorial claim” in the South China Sea.

“We have seen dangerous encounters between vessels at sea and provocative actions to advance unlawful maritime claims,” US Secretary of State Antony Blinken said during a Security Council meeting on maritime security.

Beijing has claimed sovereignty over the South and East China Seas as intense territorial disputes are underway with Japan, Malaysia, Vietnam, the Philippines and other countries in the region.

Furthermore, other Quad members nations are in conflict with China at trade and security levels. Currently, Canberra and Beijing are engaged in savage trade war and economic disputes after the Morrison government called for an investigation into the origins of Coronavirus. Beijing has been targeting billions of dollars’ worth of Australian exports to in response to Canberra’s actions against China. At the same time, India and China are facing tensions at the LAC (Line of Actual Control) after the armies of the two nations engaged in multiple faceoffs last year.