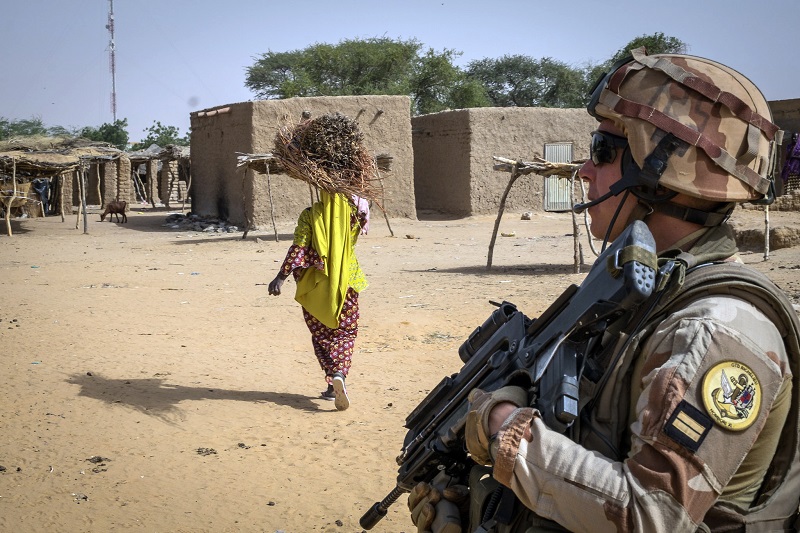 Sahel -For years, a cross-border conflict has occurred in the Sahel area involving government forces, armed insurgency groups, terrorist cells, and international actors. However, the armed insurgency in states such as Mali, Burkina Faso, and Niger increasingly threatens the survival of weak central governments supported by traditional powers, such as France, whose role in the region is now declining compared to new emerging forces. Therefore, the Sahel is preparing to become a battlefield made up of actors of various kinds who take advantage of the political and institutional chaos to realize their short-term interests at the expense of the political stabilization of the region.

The situation is such that when factions advance and conquer ground, the defeated armed groups enlist in existing forces or private actors. This concatenation continues to produce instability and violence, exposing the inability of the armed forces and the central government to establish order and protect the population.

Violence and instability have persisted for about ten years. State authorities cannot guarantee border control; corruption and crime are rampant in every area of ​​society. Among the triggers underlying the situation of general instability is the separatist rebellion that broke out in the north of Mali in 2013. The protagonists are the Tuareg, a desert tribe that has claimed an independent state – the state of Azawad – in the north of the country. The group is militarily prepared thanks to the aid received from Gaddafi and the alliances made with the jihadist cells of Al-Qaeda in the Maghreb (AQIM). The French forces soon repressed the insurrection, which intervened in support of the Malian central government. However, this did not stabilize the country but instead marked the beginning of a domino effect that swept across the region, triggering inter-ethnic conflict religious conflicts.

Non-state actors in the Sahel – armed groups, private agencies, jihadist cells – benefit from the illegal trafficking of weapons and people in a climate of solid political instability. In this context, the Salafi jihadist ideology lends itself well to mobilizing local communities which, in the absence of a state capable of guaranteeing the monopoly of violence, join armed groups based on historical-cultural, ideological, or convenience economic reasons. Thus, like Jama’at Nasr al-Islam wal Muslimin (JNIM), the leading group linked to al-Qaeda, stands as a defender of the Fulani, an ethnic group heavily targeted by central governments. At the same time, the Islamic State protects the ethnicity of the Dogon. In addition, third states intervene militarily in the Sahel to defend their commercial interests: access to natural resources and arms sales. Finally, the solid territorial fragmentation allows local groups – nomadic groups, jihadist cells, private actors – to take control of some areas and replace the state. That pushes powers such as France to intervene in defense of central governments and oppose armed insurgency groups.

Furthermore, the northern region of Mali is one of the major transit countries on the migratory routes that depart from sub-Saharan Africa and arrive in Europe. Thus, the French intervention in the Sahel also has security and political implications: counteracting migratory flows and obtaining political credibility at the international level by acting as a defender of the world from Salafist jihadism.

Paris intervened in Mali in January 2013 with the Serval operation. The goal was to support government forces in the fight against terrorist groups and to secure the country. However, considering the heightening of tensions in the following months, In August 2014, the Barkhane operation was launched, which was not limited to Mali only, also extending to Burkina Faso, Niger, and Chad. It was the most significant military deployment that France had abroad. The goal of the new operation was to support the armies of the countries as mentioned earlier, strengthen the coordination of international military resources and carry out actions in favor of the population, such as access to services. To this end, at the beginning of 2020, a new European force was set up to complete Operation Barkhane, Task Force Takuba, which brings together special forces from various European countries to stabilize the area.

The French operations in the Sahel, worth over 1 billion euros a year, caused the deaths of hundreds of French soldiers and civilians from 2013 to last year. According to a January 2021 survey carried by Ifop, only 49% of French respondents approved the French intervention in Mali. President Macron is considering a regional withdrawal to avoid falling into the same trap as the United States in Afghanistan: finance ” an endless war ” with more losses than gains. However, the Elysée is aware that its international competitors could take advantage of his retirement to advance their interests in the region. The concern concerns Russia close to Bamako: both countries signed a military cooperation agreement in 2019, and Moscow trained many junta members.