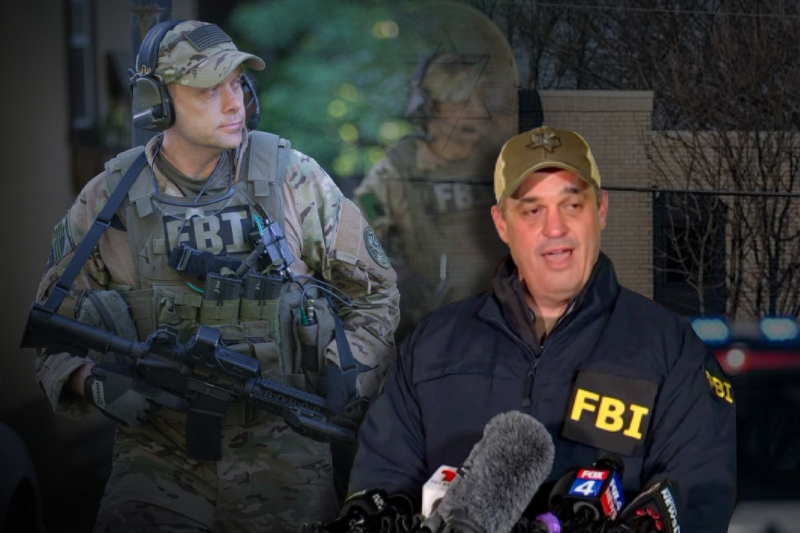 Texas –  On Saturday morning, an armed assailant took four people as hostages at a Texas synagogue, thus beginning 11-hour long siege at Congregation Beth Israel in Colleyville, in the Dallas-Fort Worth metropolitan area. At the end of siege FBI has identified the man who took hostages, including rabbi, as 44 year old British national Malik Faisal Akram. Akram took the hostages after disrupting the religious service at Texas synagogue. He later released one hostage, said to be the rabbi, after six hours unharmed, at approximately 5 pm. Over 10 hours after the siege began, FBI’s hostage rescue team stormed in the building to free the remaining hostages. After that Akram was pronounced dead by the FBI team.

The standoff began on Saturday morning as the service’s Livestream on Facebook was disrupted with a man with heavy British accent could be heard shouting. During the live stream, Akram was heard demanding release of Pakistani neuroscientist Aafia Siddiqui. She is currently serving 86 year sentence in a Texas federal prison after being arrested in 2010 over charges of killing US military officers in custody in Afghanistan. She is also suspected of having ties with al-Qaeda. Akram called her as his “sister”, as heard on the Livestream. John Floyd, board chair for the Houston chapter of the Council on American-Islamic Relations – the country’s largest Muslim advocacy group – has confirmed no involvement of Aafia Siddiqui’s brother, Mohammad Siddiqui.

President Joe Biden called the gunman’s act as an “act of terror”. Speaking from Philadelphia, President Biden said, “I don’t have all the facts, nor does the attorney general – but allegedly the assertion was he got the weapons on the street. He purchased them when he landed and it turns out there apparently were no bombs that we know of … Apparently he spent the first night in a homeless shelter. I don’t have all the details yet so I’m reluctant to go into much more detail.”

On Sunday the British foreign secretary, Liz Truss, condemned the incident on Twitter. “My thoughts are with the Jewish community and all those affected by the appalling act in Texas. We condemn this act of terrorism and antisemitism,” Truss said. She added, “We stand with US in defending the rights and freedoms of our citizens against those who spread hate.”

Akram’s brother Gulbar has puprtedly written a post that was posted on post on the Blackburn Muslim Community Facebook page, soon after Akram was named as the assailant. The post stated that Akram “was suffering from mental health issues but the family were confident that he would not harm the hostages”. It added that family members were in an incident room all night liaising with Akram, the FBI and hostage negotiators. “There was nothing we could have said to him or done that would have convinced him to surrender,” the post states. It added, “We would also like to add that any attack on any human being be it a Jew, Christian or Muslim etc is wrong and should always be condemned.”