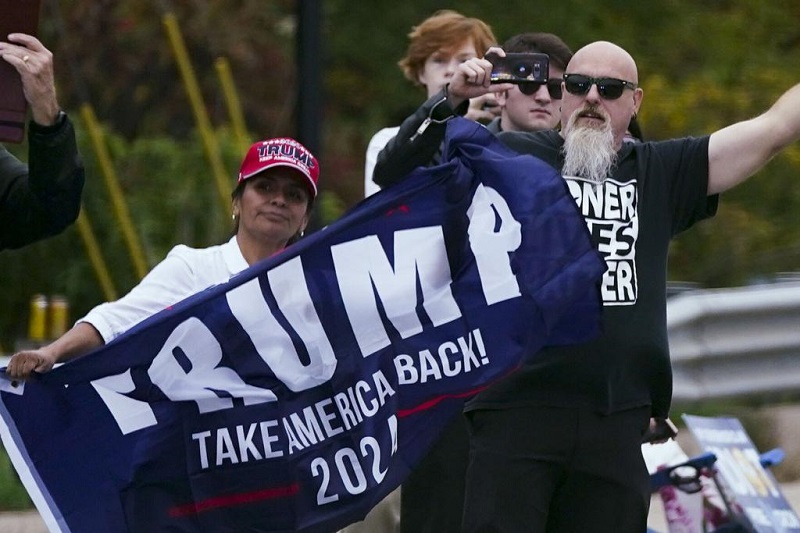 It started with a stadium choir in a car race and ended up being printed on T-shirts and sung by the pilot of a Southwest Airlines flight. In America, the most sung, quoted, and controversial phrase of the moment is “Let’s go, Brandon,” literally ‘come on, Brandon.’ Still, it has become an implied way by Republicans to say ‘fuc … Biden‘, insulting the president of the United States.

It all started on October 2 when NBC interviewed Brandon Brown, 28, a fresh driver who won a race in the North American NASCAR car championship at the Talladega circuit in Alabama. While the interviewer was asking the questions, the crowd repeatedly chanted the insult directed at Joe Biden. Still, turning to the studio, the reporter said they were singing, “Let’s go, Brandon.” The direction immediately turned down the volume. Too late. The episode had gone viral.

From the public of Nascar, a conservative basin, the phrase has spread to the rest of the country. The video of the interview appeared on social media, many Republicans have begun to write in their post ‘”Let’s go, Brandon.” Texas Governor Greg Abbott did so on Twitter on Oct.22. And Texas Senator Ted Cruz, one of the possible presidential candidates in 2024, had himself photographed at the World Series of baseball with a sign bearing the phrase.

Donald Trump wasted no time: the former president put up for sale online to raise funds for his campaign, a “limited edition” t-shirt priced at 45 dollars. In one of the email messages to supporters, Trump was explicit: “#FJb or Let’s Go Brandon? In any case, President Trump wants you to have our new iconic t-shirt”.

On Amazon, dozens of sites sell versions of the t-shirt with the slogan: some have the American flag, others a pop image of Trump wearing sunglasses or a stick figure showing his middle finger. An anti-Trumpian version reads, “Biden won, Brandon resigned,” but those of insults are the overwhelming majority.

However, what happened aboard Southwest Airlines became a coincidence. The pilot, speaking to the passengers during the flight, repeatedly said, ‘Let’s go, Brandon,’ arousing opposite reactions among the passengers. Some smiled. Others were perplexed. The news went viral because on board was an Associated Press reporter, Colleen Long, who wrote a piece, which was then relaunched on Twitter.

Protests arrived at the company within a few hours. CNN host Jack Tapper, one of America’s famous faces, has announced that he will no longer fly Southwest until the pilot is suspended. The company has launched an internal investigation. But, for the moment, the only one to pay has been the involuntary protagonist of the story, Brandon. The driver of a poor team owned by his father, Brandon no longer finds sponsors ready to link their name to him, which has become too controversial.