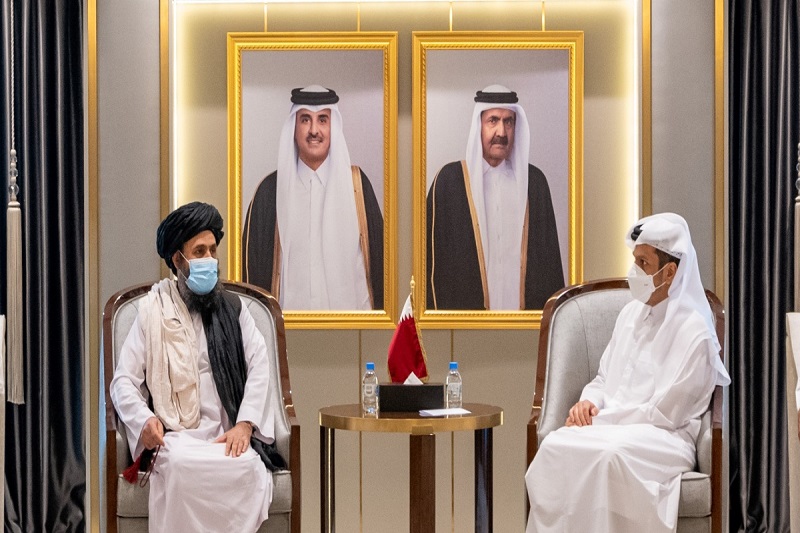 qatar to play as key mediator between taliban and isis k

Qatar – Doha has established itself as the key mediator between the various social partners in Afghanistan, and today has initiated negotiations between the Taliban and the leaders of ISIS Khorasan (ISIS-K) to refrain from any terrorist operations targeting civilians in Afghanistan. Qatar’s Foreign Minister Sheikh Mohammed bin Abdulrahman al-Thani recently said his country continues to dialogue with the Taliban in Afghanistan, encouraging them to act as “members of Afghan society”.

Qatar, in addition to hosting the largest military facility used by Washington in the Gulf, al-Udeid, has played a significant mediating role in Afghanistan. It also hosted the peace talks that led to the agreement between the Taliban and the US, on February 29, 2020, in which the United States pledged to withdraw all its soldiers present in Afghanistan within fourteen months of signing the agreement. Precisely this pact is believed to be at the origin of the escalation that allowed the Taliban to take control of the Asian country and to settle, on August 15, in the capital Kabul. The commendable Doha efforts between ISIS-K and the Taliban represent a tall order.

Who are the ISIS-K militiamen? It is a terrorist group affiliated with the self-proclaimed Islamic State in Afghanistan. The letter K because it refers to Khorasan. The group’s full name is the Islamic State of Iraq and the Levant – Khorasan Province: “Khorasan Province of the Islamic State.” They are in competition with the Taliban: they consider them too moderate. They were born six years ago. They are active in Khorasan, a Central Asian province of the Islamic State. The province name of Khorasan refers to medieval Muslim empires in an area between parts of Iran, Afghanistan, and Central Asia. In 2015, Daesh announced its expansion in the Khorasan region, which historically includes parts of today’s Iran, Central Asia, Afghanistan, and Pakistan.

As stated by CNN, Qatar still represents the main “diplomatic link” in Kabul. In this regard, minister al-Thani said that Doha continues to do everything possible to push the Taliban to act as part of Afghan society, but their reaction appears to be, at the moment, unpredictable and will be until there is. a “clear answer”. For the Qatari mediator, it is necessary for the Islamist group to commit itself to a peaceful solution, based on a sort of sharing power and on the protection of minorities, including radical groups. Otherwise, according to al-Thani, neither Doha nor the international community will be able to help.

The opening of a political office of the Taliban in Qatar dates back to 2013, functional to the talks undertaken in the following years and enough to forge links with all the actors involved. Although the situation in Afghanistan was defined on the battlefield and not at the negotiating table, analysts said providing political space for the Taliban led Doha to play a relevant role, engaging as a neutral actor with all parties involved.

What happened in Kabul on August 15 represented the height of tensions that have been going on for weeks, which have allowed the Taliban to gradually take control of the country. In fact, the Islamist group’s massive nationwide offensive began in April when US President Joe Biden announced that US troops would withdraw from Afghanistan after two decades of field presence. The return of US soldiers to their homeland had been agreed upon by representatives of Washington and the Taliban on the occasion of a “historic” peace agreement concluded between the parties in Doha, Qatar, on February 29, 2020.  The agreement also included a table the march towards peace in Afghanistan, the end of relations between the Taliban and al-Qaeda, and the cessation of the offensives against large urban centers. However, the agreement was violated several times and did not end the violence, which escalated during and after the negotiations. This is why Doha has changed strategy, assuming a neutral role and recognizing ISIS-K as a social component to be involved as an active part in the construction of the Islamic Emir, avoiding violence and attacks against civilians.