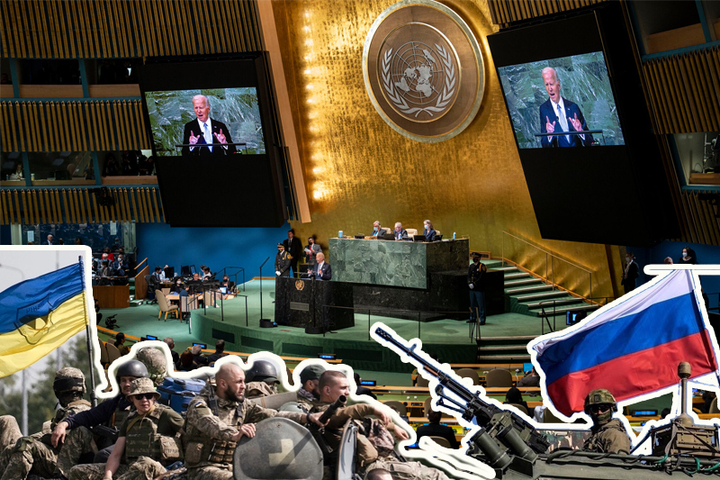 At the United Nations General Assembly, the issue of Russia’s invasion of Ukraine has taken center stage. Germany and France have condemned Russian President Vladimir Putin’s “imperialism,” Qatar, Senegal, and Turkey have called for immediate peace talks, and Lithuania has urged the establishment of a war crimes tribunal to punish Moscow’s atrocities.

Olaf Scholz, the German chancellor, stood on the rostrum of the United Nations in New York City late on Tuesday and declared that there was “no justification whatsoever” for Vladimir Putin’s decision to invade Ukraine in February. “This is imperialism, plain and simple,” he said, adding that it spelled catastrophe not only for Europe but also for the world order that was founded on laws.

As the conflict in Ukraine nears its seventh month, the United Nations is currently holding its General Assembly, which marks the organization’s first full, in-person leader’s summit since the COVID-19 epidemic. This battle has escalated into the bloodiest war to erupt in Europe since the Second World War, with thousands losing their lives and millions being forced to evacuate their homes.

A global food crisis has been generated, especially in poor nations, as a result of the loss of significant grain and fertilizer shipments from Ukraine and Russia.

In two votes that took place shortly after Russia’s invasion of Ukraine, the United Nations’ General Assembly overwhelmingly condemned Russia’s aggression against Ukraine and demanded an immediate ceasefire as well as the withdrawal of all Russian forces from Ukrainian territory. Approximately 140 of the UN’s member nations participated in the voting. However, more than thirty countries, including China, India, and South Africa, chose not to participate.

Emmanuel Macron, the President of France, gave an impassioned speech in which he stated that no country should remain indifferent towards the condemnation of the Russian incursion.

He posed the question to the audience, “Who here can defend the premise that the invasion of Ukraine justifies no sanction? Who among you here can consider that on the day that anything like with a more powerful neighbor happens to you, there will be silence from the region and from the world?”

In the meantime, the President of Lithuania, Gitanas Nauseda, has issued a call to action to other UN member nations, urging them to establish a tribunal to try Russia for alleged war crimes.

It is imperative that those responsible for the heinous crimes and atrocities committed throughout the conflict not go unpunished. In addition to urging countries who buy Russian oil to suspend imports and “stop supporting this terrible war,” he stated that ensuring justice and responsibility is of crucial importance from the perspective of maintaining the legitimacy of the United Nations and the international community.

However, a number of nations have voiced their discomfort with being forced to take a side.

Macky Sall, the president of Senegal and the current chairman of the African Union, made the following statement: “I have come to say that Africa has suffered enough of the burden of history; that it does not want to be the breeding ground of a new Cold War; that it would rather be a pole of stability and opportunity open to all of its partners on a mutually beneficial basis.”

The Emir of Qatar, Sheikh Tamim bin Hamad Al Thani, has added his voice to the chorus of those calling for peace.

In spite of the fact that “we are fully aware of the complexity of the Russian-Ukrainian conflict and its international dimension,” he stated that “we advocate for a ceasefire and the immediate pursuit of a peaceful settlement to the conflict. This is how the situation would eventually resolve itself regardless of how long the war lasts,” the speaker said. Its continuation would not alter this result; rather, it would increase the number of casualties and treble the severity of the situation for Europe, Russia, and the economy of the world in general.

In the meantime, the President of Turkey, Recep Tayyip Erdogan, stated that the recent agreement that his nation and the United Nations had recently helped broker on Ukrainian grain exports was one of the finest triumphs that the global body has had in recent years.

In his statement, Erdogan stated, “We have assured that Ukrainian grain reaches the world via the Black Sea as a consequence of our strenuous efforts with UN Secretary-General Antonio Guterres.” Guterres is the current head of the United Nations. One of the most significant accomplishments of the United Nations in the recent past is the signing of this agreement, which will help to ensure that there will always be enough grain to go around.

He stated that Turkey would continue its efforts to bring an end to the conflict through the negotiation of a peace deal “based on Ukraine’s territorial integrity and independence.”

The Prime Minister of Japan, Fumio Kishida, the President of Chile, Gabriel Boric, and the President of Switzerland, Ignazio Cassis, were among the other world leaders that participated in the general debate on the first day.

On Wednesday, Presidents Joe Biden of the United States and Volodymyr Zelenskyy of Ukraine are scheduled to deliver speeches before the United Nations General Assembly.

Both Putin and Xi Jinping, who is the President of China, will not be present. Instead, they dispatched their ministers of foreign affairs.