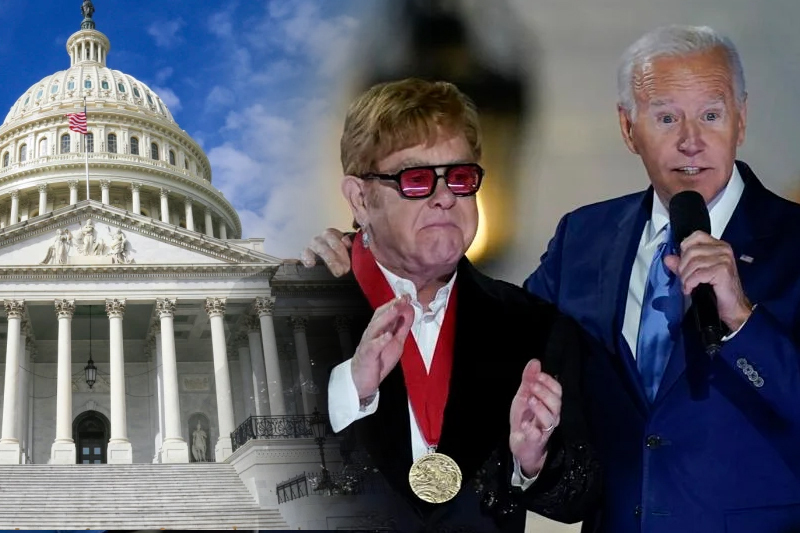 “I’m never flabbergasted, but I’m flabbergasted,” these were the words by visibly moved Sir Elton John as he thanked President Biden, saying that he will “treasure” this honor. President Joe Biden surprised Elton John on Friday with the National Humanities Medal that was presented to him following his performance on South Lawn of the White House.

The medal was to honor Sir Elton John “for moving our souls with his powerful voice and one of the defining song books of all time. An enduring icon and advocate with absolute courage, who found purpose to challenge convention, shatter stigma and advance the simple truth — that everyone deserves to be treated with dignity and respect.”

President Biden and first lady Jill Biden said that John was invited to the White House to thank him for his music and advocacy in the global fight against HIV/AIDS. “As Jill just mentioned, we’re joined by so many people that … he’s set free to be themselves, to be treated with dignity and respect they deserve. Families and advocates in the fight against HIV/AIDS. A fight that he has led with sheer will, a​​​ fight for those lives lost and those lives we can save. Leaders standing up for equality of all people, no matter who you are, or who you love,” the President said.

On South Lawn of the White House, John was applauded with standing ovations as he performed on his many hit songs, like “Your Song,” “Rocket Man” and “Tiny Dancer,” during the concert titled “A Night When Hope and History Rhyme,” in collaboration with A&E Networks and The History Channel. The event was attended by about 2000 guests that included high profile people and government officials, including civil rights advocate Ruby Bridges, House Speaker Nancy Pelosi and Transportation Secretary Pete Buttigieg, as well as teachers, nurses, LGBTQ advocates and military families, who were described as “everyday history makers” by the White House.