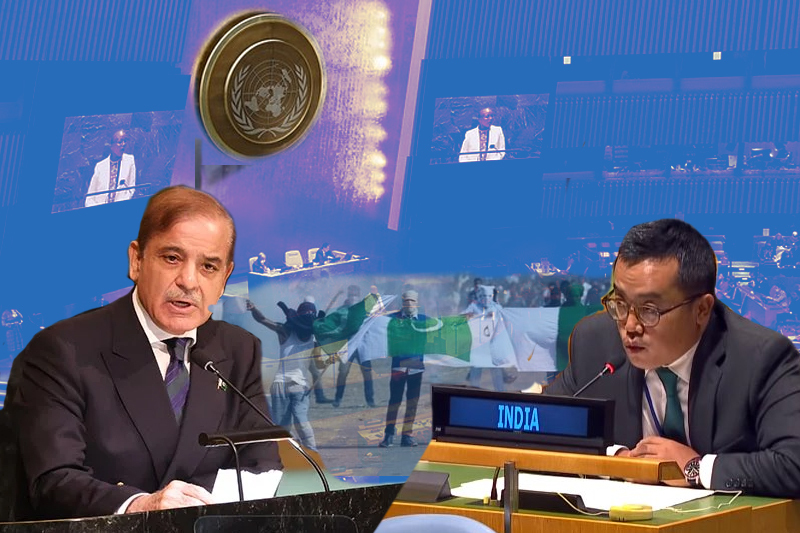 india fiercely responds to pakistans comments on kashmir at unga

India fiercely responds to Pakistan’s comments on Kashmir at UNGA

Indian diplomat, First Secretary Mijito Vinito gave a blistering retort at the UN General Assembly (UNGA) on Saturday to Pakistan Prime Minister Shehbaz Sharif as he gave some offensive and regrettable comments on the Kashmir issue.

In his address to the UNGA session in New York. Pakistan Prime Minister Shehbaz Sharif, brought up the issue of Kashmir and said that India’s “illegal and unilateral actions on August 5, 2019, to change the special status of Jammu and Kashmir, further undermined the prospects of peace and inflamed regional tensions”.

“In a classic settler colonial project, India is seeking to turn the Muslim majority Jammu and Kashmir into a Hindu territory through illegal demographic changes,” Mr. Sharif had said, as he accused India of seizing land from Kashmiri people, gerrymandering and also registering false voters, all of which are nothing but obscene lies.

“A polity that claims it seeks peace with its neighbours would never sponsor cross border terrorism. nor would it shelter planners of the horrific Mumbai terrorist attack, disclosing the existence only under pressure from the international community,” Mr. Vinito said in his reply, adding, “Such a country would not make unjustified and untenable territorial claims against neighbours.”

In his response, Mr Vinito continued, “But it is not just about the neighbourhood that we have heard false claims today. It is about human rights, about minority rights and about basic decencies.” He questioned, “When young women in the thousands from the minority community are abducted as an SOP [standard operating procedure], what can we conclude about the underlying mindset?”