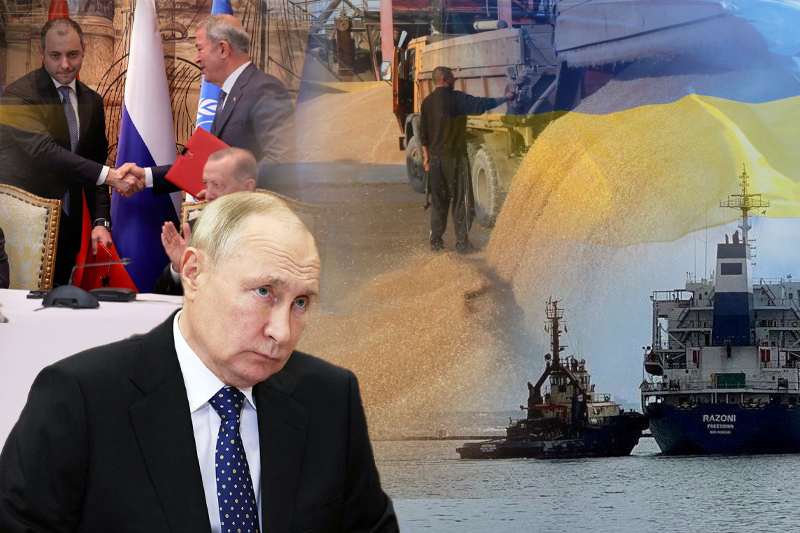 Russia has withdrawn from Black Sea grain deal, resuming its blockade of Ukrainian ports, thereby cutting off grain exports to parts of the world and raising risk of global food crisis. The move by Moscow has been called as a “really outrageous” act by US President Joe Biden. The United Nations, NATO, European Union and US have all urged Russia to reverse the decision of pulling out of the grain deal that had allowed export of Ukrainian grain via the Black Sea.

Moscow announced that it was suspending the UN brokered arrangement in response to a dramatic attack by Ukrainian airborne and underwater drones on its naval base of Sevastopol in Crimea on Saturday.

Biden has warned that global hunger could increase because of Moscow’s decision of withdrawing from the deal that allowed safe passage of ships carrying grain from Ukraine. “It’s really outrageous,” Biden said Saturday in Wilmington, Delaware. “There’s no merit to what they’re doing. The U.N. negotiated that deal and that should be the end of it.”

Kyiv’s infrastructure ministry has underlined that 218 vessels are now “effectively blocked” in its ports – 22 of which are loaded and stuck at ports, 95 loaded and departed from ports, and 101 are awaiting inspections. NATO has accused Vladimir Putin of “weaponising food” and urged him to reverse his decision. “We call on Russia to reconsider its decision and renew the deal urgently, enabling food to reach those who need it most,” spokesperson Oana Lungescu said.

EU’s foreign policy chief, Josep Borrell, tweeted that Russia’s decision “puts at risk the main export route of much needed grain and fertilisers to address the global food crisis caused by its war against Ukraine”.

Russia’s decision to suspend participation in the Black Sea deal puts at risks the main export route of much needed grain and fertilisers to address the global food crisis caused by its war against Ukraine.

The EU urges Russia to revert its decision.

Ukraine’s president, Volodymyr Zelensky, has demanded a strong response from the UN and G20 group. “This is a completely transparent attempt by Russia to return to the threat of large-scale famine for Africa, for Asia,” Zelensky said in a video address on Saturday, demanding that Russia should be kicked out of the G20.

On Sunday Ukraine’s Foreign Minister Dmytro Kuleba tweeted accusing Russia of pre-planning the move and creating a “false pretext of explosions 200 kilometers away from the grain corridor”.

By suspending its participation in the grain deal on a false pretext of explosions 220 kilometers away from the grain corridor, Russia blocks 2 million tons of grain on 176 vessels already at sea — enough to feed over 7 million people. Russia has planned this well in advance 1/2