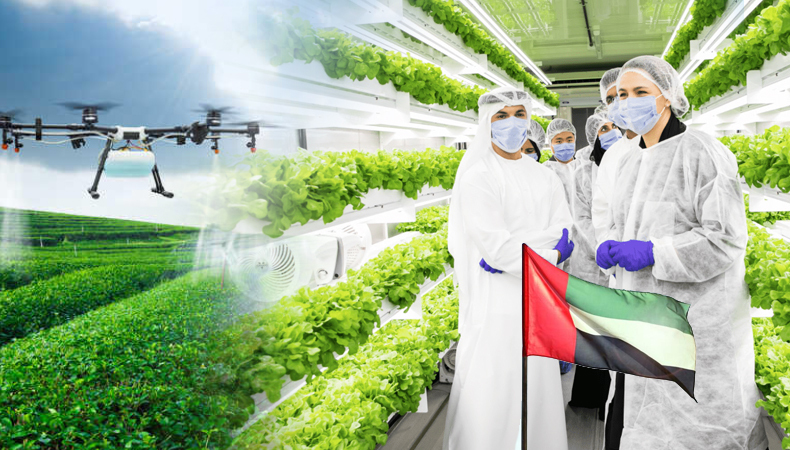 The world is currently witnessing extremely vulnerable and unpredictable times. Accelerated and continuously progressing climate changes have made the natural climatic patterns unpredictable, that are constantly going to extremes – droughts and floods are more common than ever, impacting agriculture. Furthermore, Covid-19 pandemic, politics and regional conflicts also play a role in impacting the global food supply chains. Considering all the factors, it only makes sense to act pro-actively and prepare for any unforeseen situation. United Arab Emirates has taken a similar stand and moved towards vertical farming and hydroponics to prepare food for its livestock, given it’s a desert nation with limited resources, a step to minimize its dependence on imports for the same.

World of Farming in Abu Dhabi

Startup based in Abu Dhabi, World of Farming, is beginning the onsite operations at local farms starting later this year. The farming will be focused to providing fodder food and dairy producers in the country. This groundbreaking move will reduce UAE’s dependency on foreign imports for at least 80 per cent to 90 per cent of its animal feed.

Faris Mesmar, chief executive officer of Hatch & Boost Ventures, a venture capital firm that launches and scales its own startups, said, “This region doesn’t have a lot of arable land and the dependency on imports is becoming an issue for all local privately held and commercial farms.”

What are exactly Hydroponics and Vertical Farming?

Middle East nations, with UAE leading the way, are increasingly working towards becoming independent when it comes to dependency on food on other countries. Climate changes have throttled global food supply chains, and pandemic and political conflicts have further complicated the situation. Ukraine war has led to disrupted supply of grain from Russia and Ukraine, and extreme high temperatures have destroyed crops across US and Europe.

Adapting techniques such as hydroponics and vertical farming will help reduce costs for UAE and other desert nations by cultivating the food within their borders and not import them. Hydroponic, vertical farms grow plants in indoor settings without soil, and irrigating the crops with a water-based nutrient solution, while using artificial light.

Dubai-based Emirates airline has opened world’s largest hydroponics farm in July, which will be utilized to supply leafy greens for all the in-flight meals for the airline.

A great option to grow food for livestock

According to World of Farming, fodder production is also possible with a drastically reduced carbon footprint as compared to the traditional land agriculture, while requiring less water and land. The venture uses “artificial intelligence and imagery to monitor the health and growth rate of plants and can optimize output depending on the changing needs of the animals they will feed”, as noted by the experts at World of Farming. “If vertical farming can provide a consistently affordable source of feed, it can go a long way in supporting a more resilient food system here in the UAE,” said Greg Ohannessian, co-founder of UAE-based food security consultancy Soma Mater, which has worked on vertical farming and hydroponics projects.

World of Farming has laid down plans to build, operate and manage operations for farming on private and commercial farms across the Middle East and North Africa region. Hatch & Boost has extended pledge to pre-seed World of Farming with aim to secure over $2 million in a fund-raising round which will be held later this year.