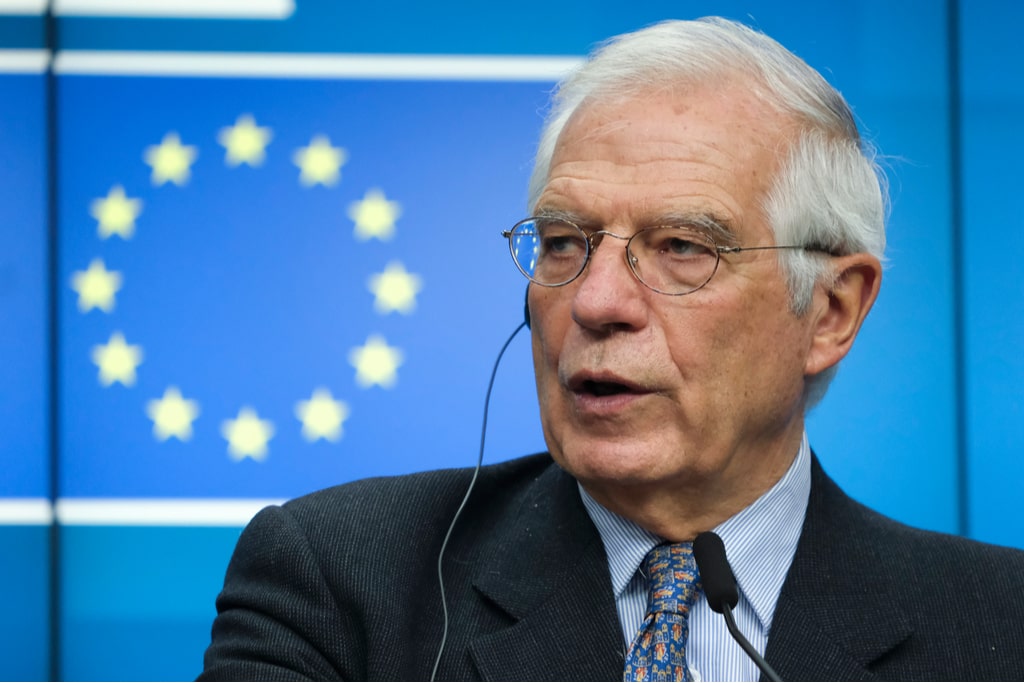 It has been a long and intense Foreign Affairs Council for the European leaders. Western Balkans, the escalation between Israel and Palestine, and the relations with the United States were the main focus of the discussions. The talks started on the postponed Palestinian elections and the serious situation on the ground in these hours, High Representative Josep Borrell indicated. “Today – which is, by the way, Jerusalem Day – is a very sensitive moment. We are deeply concerned over the recent clashes and violence, including again this morning in and around the Haram al-Sharif, Temple Mount”. Borrell told journalists during the final press conference.

“It is clear that all sides must uphold and fully respect the status quo of the holy sites. And all leaders have a responsibility to act against extremists.” He added, specifying that the situation about the evictions of Palestinian families in Sheikh Jarrah and other areas of East Jerusalem is a matter of serious concern. For the European Foreign Ministers, such actions are illegal under international humanitarian law and only serve to fuel tensions on the ground. Everything possible must be done to avoid fueling tensions. “The decision to stop Jewish worshippers from accessing the esplanade is a positive one that can calm the situation,” Borrell stressed.

The Foreign Ministers then discussed the situation in Western Balkans, as the region has a special role in Europe. They reaffirmed the European perspective of the whole region, not only about the enlargement process. “We want to ensure that we have a political engagement with our partners. From addressing the COVID-19 pandemic and vaccines, economic cooperation, connectivity, how to tackle external influence, reduce misinformation, just to name a few issues”. Borrell explained. The ministers agreed on the need for the Western Balkans to accelerate European Union-related reforms and reinforce positive and constructive narratives. EU integration with Serbia and Montenegro needs to be taken forward.  The High Representative clarified that Europe needs progress on visa liberalization for Kosovo, asking that to the Member States. There was also a clear expectation for the swift resumption of the Belgrade-Pristina Dialogue that will re-start before the end of June.

EU also recalled continued and strong support for Bosnia and Herzegovina’s territorial integrity and sovereignty. The Ministers agreed on the need for Bosnia and Herzegovina to use this year to advance constitutional and electoral reform. They also agreed to look at ways to enhance the already intense cooperation on security and global issues, including the fight against the coronavirus pandemic and contribution to COVAX.

The second big item in the Foreign Council agenda was transatlantic relations. Europe welcomed the US re-engaging on the Joint Comprehensive Plan of Action (JCPOA), the relaunching the Dialogue on China, suspending temporarily tariffs under the Airbus/Boeing dispute, or liaising on responses to developments in Russia and Myanmar. Borrell indicated that this renewed partnership between the European Union and the United States is based on more engagement, more coordination, and cooperation.

The Foreign Ministers agreed to work systematically together to set new borders, new frontiers in climate ambition, and scale-up efforts to prompt partners to deliver the best possible commitments under the Paris Agreement. They once again expressed European solidarity with the Czech Republic and Bulgaria in light of the recent events related to Russia, condemning the negative actions by the Russian Government feeding the dynamic of escalation. Yesterday’s exchange will feed into the European Council discussion on European Union-Russia relations on the next 25th May.