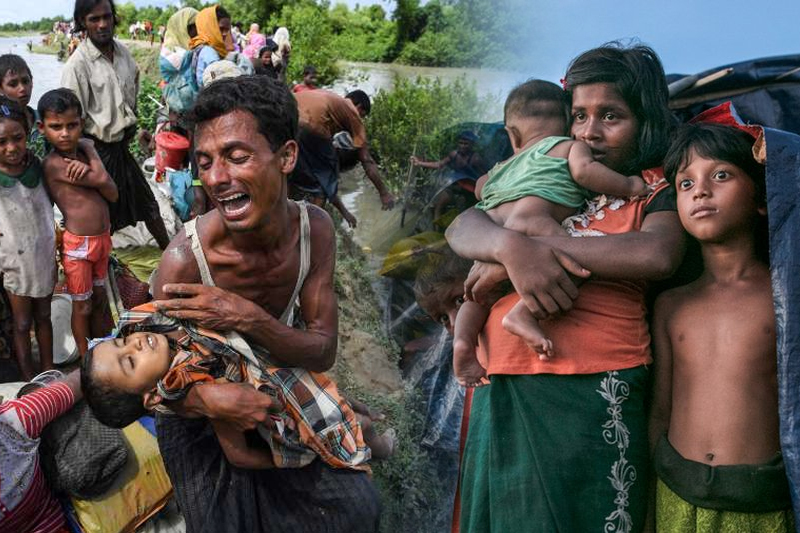 “If we remember those times, to be honest, it’s difficult to eat or sleep. 25 August was one of the black days for Rohingya.” These words of Mohammad, a Rohingya, are drenched in pain and horror as he remembers the day five years ago when he, with his wife and two children was hiding inside his house as Myanmar military had launched “clearance operations” in northern Rakhine state of country forcing thousands of Rohingya community people to flee to neighbouring Bangladesh. The current situation is not easy for anyone – neither 700,000 Rohingya Muslims who fled Myanmar after 25 August 2017 nor the 600,000 who remained in the country. All are living the life facing poverty, uncertainty and those in Myanmar have to bear the brunt of everyday crackdown by Myanmar military.

Rohingya community members who fled to Bangladesh across the border share inhumane testimonies of mass rape, murder and their homes being torched. The events shocked the world, with United Nations declaring it an act of genocide. The Rohingya who fled are now living in squalid overcrowded camps. And those who remained in Myanmar are facing conditions amounting to “crimes against humanity of apartheid, persecution, and deprivation of liberty,” according to Human Rights Watch. “We’re in name human beings, but we’re living like animals,” says Muhammad. “Even animals are happy … I cannot express the suffering.”

Today marks five years since the start of the forced mass displacement of Rohingya and other communities from Myanmar’s Rakhine State.

UN Secretary General Antonio Guterres has noted aspirations of an inclusive future among Myanmar’s many ethnic communities, and that “effective participation of the Rohingya people is an inherent part of a Myanmar-led solution to the crisis”. A statement by UN chief’s office said, “Greater humanitarian and development access for the United Nations and its partners to affected areas is crucial.  Perpetrators of all international crimes committed in Myanmar should be held accountable. Justice for victims will contribute to a sustainable and inclusive political future for the country and its people.”

UN High Commissioner for Human Rights (OHCHR), Michelle Bachelet, said from Geneva, “Myanmar’s Tatmadaw forces had maintained and even escalated operations against civilians in residential areas in southeast, northwest and central regions, 18 months since they overthrew the democratically-elected government.”