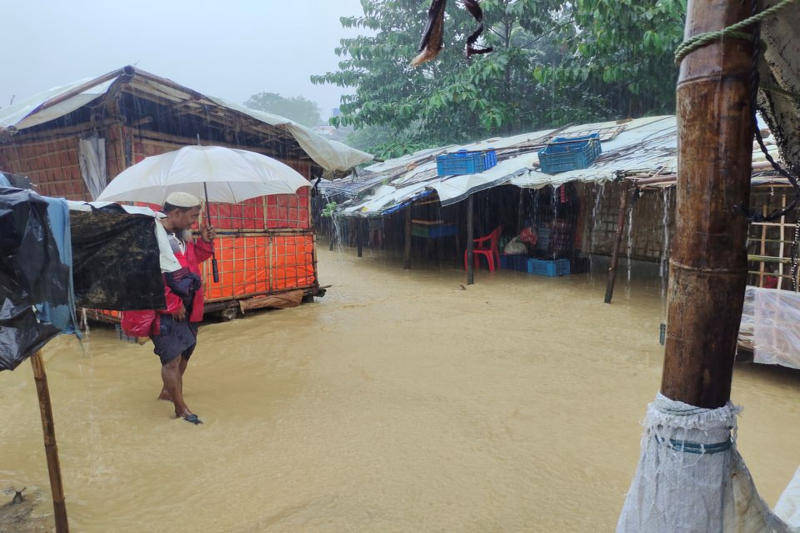 Heavy monsoon rains led to flash floods and landslides in refugee camps, displacing thousands of Rohingya Muslims, this week, in southeastern Bangladesh – U.N. and other officials reported on Friday.

More misery stays on the cards as heavy rainfalls are expected this week.

Knee-deep waters went through the camps, damaging fragile shelters made of bamboo and tarpaulin – leaving at least 5,000 people homeless, as per the UN’s refugee agency (UNHCR).

The refugee agency said emergency teams had been stationed to assess the damage and relocate families. The first responses, however, came from 3,000 trained Rohingya volunteers.

The spokesperson of Save the Children, a leading humanitarian organization for children, reported that three children died as a result of colossal rains, including two when their shelter collapsed.

Communal Violence In Bangladesh Could Have Been Triggered Through Staged Lies: HM Asaduzzaman Khan

The geopolitical role of Pakistan between the United States and China

Yasmin Ara, the founder of the Rohingya Women Development Forum, said, “They had to leave their shelters with almost nothing because the water was flooding so quickly. They only left with what they were wearing”.

She added that they need some financial assistance, food and clothes because they have nothing to wear and are also not getting medical support.”

At least six Rohingya died in landslides and flooding while about 15 Bangladeshis were killed and more than 200,000 people were left stranded by flooding in Cox’s Bazar, said Mamunur Rashid, the district administrator.

About one million Rohingya live in crowded camps in the border district of Cox’s Bazar – which is said to be the world’s largest refugee settlement – after escaping a military crackdown in neighbouring Myanmar in 2017.

They, as per media reports, mostly live in shacks made of bamboo and plastic sheets that cling to bare, steep hills. TV footage showed children playing in chest-high waters, flooded homes and muddy water cascading down hillsides and steps.

Many of them are still recovering from heavy fires that tore through the camps in March.