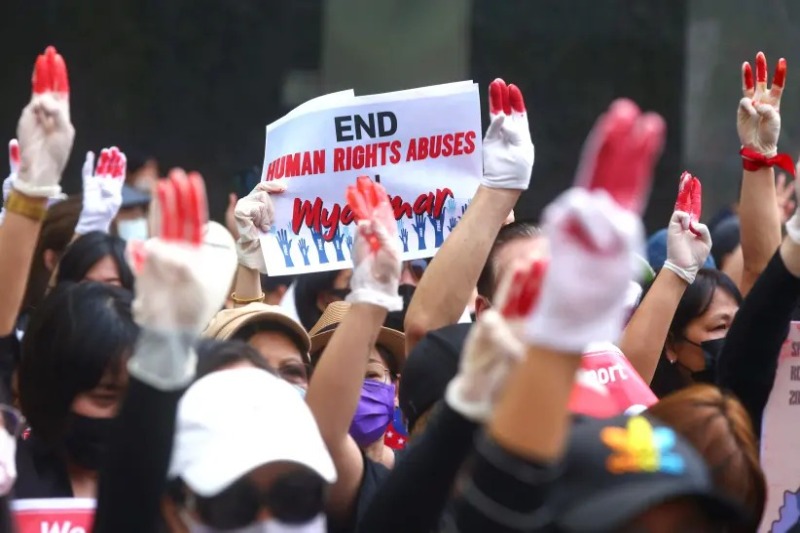 The military junta in Myanmar announced on July 25 that it had murdered four democracy campaigners accused of aiding in the commission of “terror activities,” the first such killings in decades and the subject of worldwide outrage.

Between secret trials held in January and April, four individuals were found guilty of aiding militias that fought against the army that had taken control in a coup the previous year and then carried out a violent crackdown on its opponents.

The National Unity Government (NUG) of Myanmar, a shadow administration proscribed by the governing military junta, has condemned the killings and demanded that the world community take action against the junta.

“Extremely upset… denounce the junta’s barbarism,” a representative for the NUG president’s office told Reuters in a message. The international community needs to take action against their barbarism.

Kyaw Min Yu, popularly known as Jimmy, and Phyo Zeya Thaw, a former lawmaker and hip-hop singer, were both executed, according to the Global New Light of Myanmar.

UN special rapporteur on human rights in Myanmar Tom Andrews issued a statement expressing his “outrage and devastation” at the junta’s killing of Myanmar patriots and supporters of human rights and democracy.

“The people of Myanmar, and especially those who have fallen prey to the rising horrors of the regime, are in my thoughts and prayers. The world community needs to make a stand after these heinous crimes.”

Phyo Zeyar Thaw’s wife, Thazin Nyunt Aung, said she was unaware of his killing. No other family members were available for comment at the time of this writing.

A source familiar with the situation revealed last Friday that the men’s relatives had visited the colonial-era Insein prison where they had been detained. The individual said that just one member of each detainee’s immediate family was permitted to contact them using the video-conferencing app Zoom.

A spokesman for the junta, Zaw Min Tun, acknowledged to Voice of Myanmar that the killings had indeed taken place on Monday, as reported by Myanmar’s state media. Neither of them disclosed the dates of the executions.

The traditional method of execution in Myanmar is by hanging.

The Assistance Association for Political Prisoners (AAPP) is a group of activists who claim that the last judicial executions in Myanmar took place in the late 1980s.

He said at a televised news conference, “at least 50 innocent citizens, excluding security forces, were killed because of them.”

‘How can you claim this is not justice?’ he questioned. The necessary things must be done at the necessary times.

As chair of ASEAN in June, Cambodian Prime Minister Hun Sen wrote a letter to junta leader Min Aung Hlaing expressing ASEAN’s and other countries’ grave concern about the executions.

Statements made by foreign governments regarding the execution orders have been deemed “reckless and meddling” by Myanmar’s ruling junta.

Since the coup last year, unrest has spread throughout Myanmar after the military suppressed largely peaceful rallies in the cities.

“Murders were committed in these gruesome killings. All of these atrocities are part of the junta’s larger campaign of violence against the populace,” Fortify Rights’ Southeast Asia director Matthew Smith said Reuters.

The junta is mistaken if they think this will make revolutionaries more fearful.

Over 2,100 individuals, according to the AAPP, have been slain by security forces since the coup. Junta officials have claimed that estimate is inflated.

Due to the extension of fighting to more out-of-the-way locations, where insurgent organizations from ethnic minorities are also waging war against the government, the full scope of the violence has been difficult to ascertain.

Last Friday, the World Court rejected Myanmar’s objections to a genocide complaint over its treatment of the Muslim Rohingya minority, paving the way for the case to be heard in full.

According to Myanmar expert Richard Horsey of the International CRISIS organization, all hope for a peaceful resolution to the conflict has been dashed by the recent executions.

The coup has “completely eliminated” the chance of discussion, Horsey told Reuters.

“The regime is showing that it will do anything it wants regardless of public opinion. It considers this a show of force, but it could be a huge mistake.”

Executions were carried out to put an end to anti-coup protests, according to Elaine Pearson, Human Rights Watch’s acting Asia director.

The nations of the European Union, the United States, and elsewhere should “signal the junta that there will be a reckoning for its crimes,” added Pearson.

To show the junta that its atrocities will not go unpunished, they must take swift action, which must include the release of all political detainees.