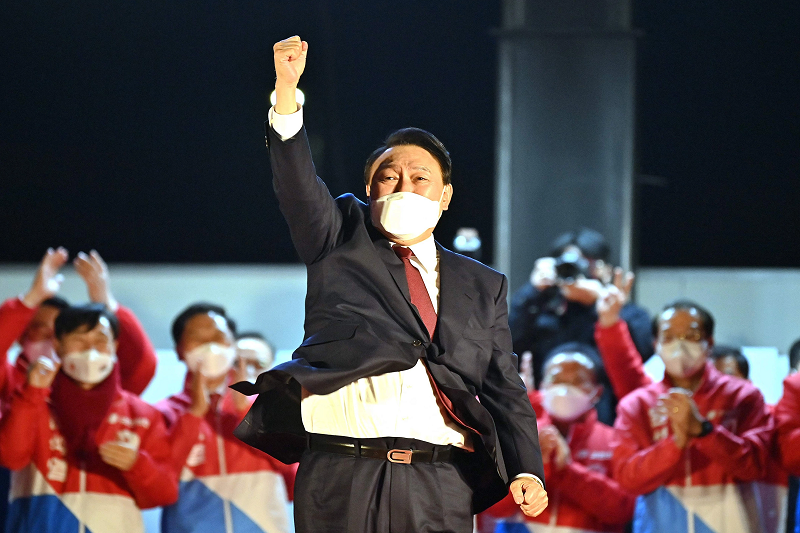 South Korea -After winning the Presidency of South Korea on Wednesday by a razor thin margin from rival Lee Jae – myung, conservative Yoon Suk Yeol of People Power Party is all set to take power in the country at a rather crucial time. A new face in politics, Yoon has been a prosecutor for last 27 years. As he replaces his liberal predecessor President Moon Jae – in in the Blue House, he has some great challenges lined up both regionally and internationally.

Unlike his predecessor Moon Jae – in who always held his position of dialogue and peaceful reconciliation with North Korea, the new South Korean President has made his stance obvious. Even during his campaign he focused and made it clear that he holds a tough stand against North Korea. North Korea has been shaking up the regional and global stage with recent missile tests in recent months. While Lee Jae from Democratic Party stressed that trust based engagement with the neighbor in north is the right approach, Yoon promised building up of South Korean military to stand strong against the threateners. “We will build a powerful military force that can assuredly deter any provocation to protect the safety and property of our citizens and safeguard the territorial integrity and sovereignty of our nation,” Yoon said.

But experts have warned that this hardline attitude of Yoon might further escalate tensions between North and South Korea. Cheong, from the Sejong Institute, said that Yoon’s election would bring inter-Korean relations to “return to the hostile relationship of the Cold War era.”

China and US: Tensions between global powers

Yoon’s win can also change South Korea’s relations with the two global superpowers that are on the opposing ends – China and United States. South Korea, for years, has enjoyed a safe tightrope walk with both the nations – a security alliance with US and economic pact with China. Though Lee said that he would seek to strike a balance between both the partnerships, Yoon was clear of his priorities. “South Korea and the United States share an alliance forged in blood as we have fought together to protect freedom against the tyranny of communism,” Yoon had said in January, adding that South Korea must “rebuild this alliance.” Experts say that Yoon’s antagonism against China reflects public sentiment at present. Kim from Sogang University said, “This is probably the highest antagonism for China shared by the Korean public — which means a very strong and friendly feeling toward the United States.”

Apart from global and regional challenges, there are a plentiful issues laying ahead at home for Yoon. Key issues that have defined the election outcome include Covid-19 pandemic, polarized politics, corruption and gender equality. The latest issue that surfaced aggressively in run up to election was gender equality as the young voters were more split along the gender lines.

People have claimed that in a bid to address gender inequality in nation, the buck has tipped too far in favour of women amid an increasingly competitive job market. Speaking in favor of the so-called “anti-feminists”, Yoon promised in a campaign to abolish the Ministry of Gender Equality and Family, claiming that it is unfair to men.

Challenges are plentiful and Yoon’s stand being different from his rivals and even predecessor can stir up the region.