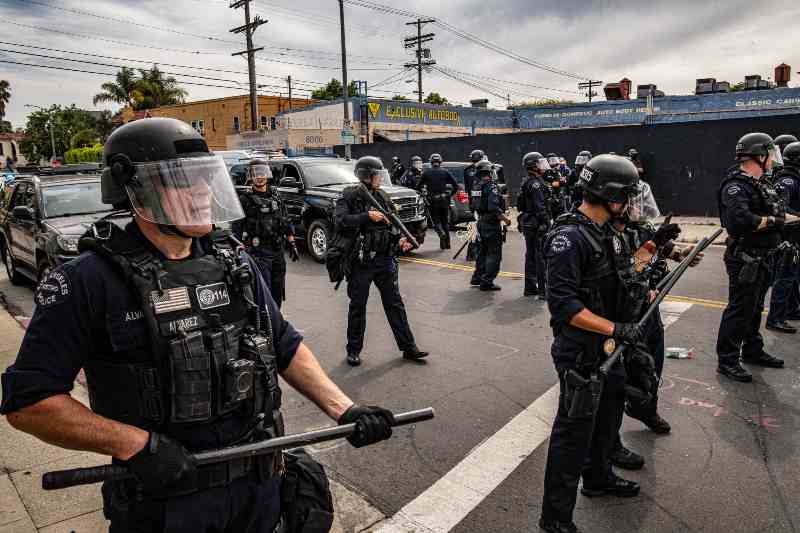 police reform in the united states

The US President Joe Biden received in the White House the family of George Floyd, the African American man killed in Minneapolis by policeman Derek Chauvin, on the occasion of the first anniversary of his death. The murder of Floyd started one of the largest civil rights protest movements in recent American history, one of the goals of which was to deeply and, in some cases, radical reform the structure and practices of the American police.

For months, during the protests, the slogan defunds the police had been one of the most popular, and in the last year, numerous legislative proposals for reform have been presented both at the federal level is local. Biden last month promised that within a year of Floyd’s death he would have a comprehensive police reform passed by Congress: he failed, the law is still under discussion in the Senate, but in the meantime. dozens of states and municipalities have passed new laws and regulations. Overall, while far from the demands of civil rights protesters, the new rules have ensured some small steps forward, but for now they are failing to reduce the problem of police violence.

The federal law that Biden and the Democratic Party would like to pass as soon as possible is called the “George Floyd Justice in Policing Act” and is a broad reform that regulates police activities in many respects. of sight. It prevents certain behaviours considered dangerous, such as techniques to immobilize suspects that put pressure on the neck, and controversial practices such as no-knock warrants, i.e. search warrants that allow agents to enter private property without warning first (in 2020 Breonna Taylor was killed by the police in an operation of this type). The law also provides for the creation of a national register of policemen who have problematic behavior and prohibits religious or racial profiling, that is, investigative activities based on suspicions related to ethnicity or religion instead of evidence.

Above all, the law would abolish the principle of qualified immunity, a legal device that gives immunity from civil lawsuits to all public officials and not only policemen as long as their conduct is considered “in good faith” and does not violate “legal rights or clearly defined constitutional “. The principle, sanctioned by the Supreme Court decades ago to avoid spurious complaints to public officials, has recently been used in the vast majority of cases of police brutality to avoid consequences at the level of civil justice, which often makes it impossible for the families of the victims. get even just compensation.

The abolition of this immunity is the main element of disagreement between Democrats and Republicans in the Senate, and the reason why the “George Floyd Justice in Policing Act” has not yet been passed: the law is easily passed in the House, where the Party Democrat has an absolute majority, but 60 votes are needed to pass the Senate, and therefore the collaboration of some Republican senators. Negotiations are still ongoing, and the hopes for a bipartisan vote are good enough, according to the New York Times.

Why Georgia Is Cleaning Up Its Voter List With 100,000 names

In addition to this federal law, dozens of state and city governments have passed local laws and regulations. In an April article, The New York Times calculated that after George Floyd’s death, more than 30 US states passed more than 140 new regulations, and in the meantime, these numbers have increased: last week the governor of the state of Washington signed 12 police reform laws.

Four states have reduced immunity for police officers, 10 have made it mandatory for policemen to have a video camera on at all times, 16 have banned manoeuvres that oppress suspects’ necks and 5 have restricted the use of no-knock warrants. Many states have also made it easier to report abuses and acts of police brutality.

Most of these new regulations have been passed in states where the Democratic Party governs, but not only: in some cases, such as Colorado, there have been bipartisan legislative initiatives, and some police reform laws have also been passed in Republican states such as Kentucky, Indiana, and Iowa.

Many city administrations, on which the budget of the local police offices depends, have mainly dealt with cutting or limiting the funds allocated to the police, based on the defund the police philosophy, whose goal was not to zero the budget of the police forces. order, but to transfer part of the funds to social services such as drug and mental disorder rehabilitation programs and educational programs.

Currently, in the United States, it is the police that intervenes – in some cases resorting to violence – in many problematic contexts which in other countries, such as Europe, are usually managed by health or social organizations and operators. The idea of ​​completely removing the funds from the police was instead expressed only by some radical groups of the civil rights movement and was adopted as a polemical element especially by the political forces of the right.