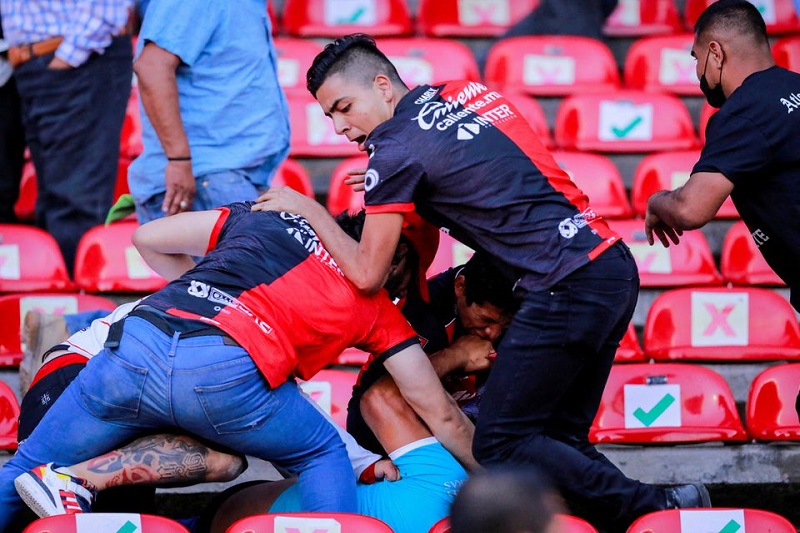 The brutal attacks among spectators took place in the Queretaro-Atlas match on Saturday. The ill-fated incident sent 26 people to the hospital, with three people in critical condition.

Mexico’s soccer league announced it would pursue sanctions. However, the federation refrained from telling what the sanctions might include or who might be held responsible.

“We have the challenge to generate an understandable response and effective punishment,” said the president of Mexico’s Liga MX league.

“We aren’t going to have any soccer activity until the case is resolved,” Mikel Arriola added, referring to the Corregidora stadium.

Liga MX stopped Saturday’s match after 62 minutes as spectators stormed the pitch. Atlas was leading 1-0 in the game. Social media images showed fans being brutally beaten, dragged, and kicked in hallways and seating areas of the stadium.

“They hit me with a chair. I have a bump right here,” he added, pointing to his head.

Mauricio Kuri, the governor of Queretaro state, said some probes had been undertaken for attempted murder.

“We can’t say this isn’t a tragedy if there were no deaths,” Kuri told reporters.

Neither league officials nor the government addressed what triggered the clashes, which were condemned by both the competing teams.

“There is no reason to lie or conceal anything.”