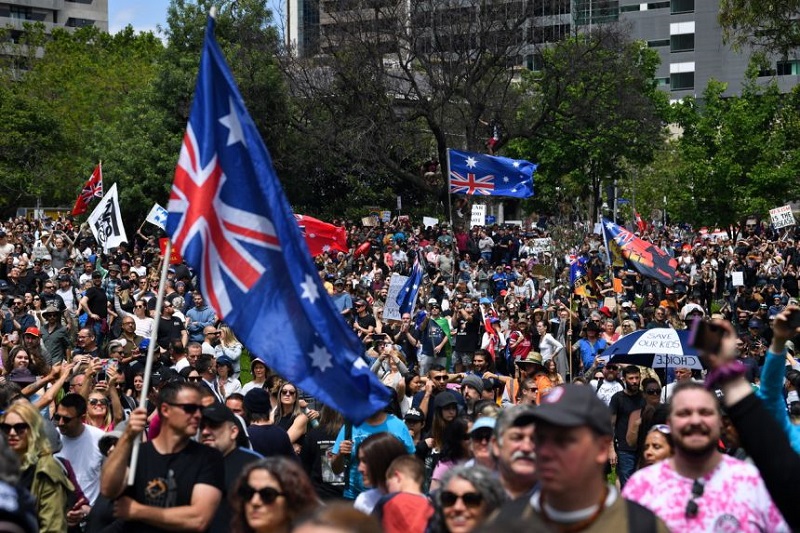 australia takes to streets in anti and pro lockdown measures

Australia – Melbourne saw thousands of Australian protestors on the streets in protest of the Covid-19 vaccination mandate today, whereas small crowds of people gathered to support the measures which make them the most inoculate country in the world.

As per the current figures, 85% of Australians above the age of 16 and above have been fully vaccinated in the country, against Covid. Vaccinations are made mandatory by the states for many occupations, and non-vaccinated people are barred from places of public dining and concerts, whereas Nationwide vaccinations are made voluntary.

Silent protests were observed in Sydney, Brisbane, and other cities; whereas thousands of protestors in Melbourne marched on the streets chanting ‘Freedom, Freedom’ carrying ‘End Segregation Now’ signs. Melbourne was the hardest hit by the pandemic. One protestor carried a banner in Sydney, “My life is not a gift from the government, it is a gift from God.”

Australia has seen anti-vaccination rallies in the last few weeks. These rallies are usually quiet, but there are occasional violent scenes. Usually, they attract loose groups of regular citizens, as well as far-right and conspiracy theory supporters. Also, there is a small group of people protesting the anti-vaccination movement, with polls showing nationwide opposition in the single digits.

On the contrary, there was another rally in Melbourne, organized by the Campaign Against Racism & Fascism group under the slogan of ‘Don’t scab, get the Jab’. The chief of the Australia Open tournament, the year’s first Grand Slam tennis tournament and one of Australia’s biggest sporting events said on Saturday, that all players will have to be vaccinated to compete in January in Melbourne.

As per the data shared, 1166 new Covid-19 infections were reported in Victoria on Saturday, and Five deaths due to Covid were also reported. The highest populated state New South Wales reported 182 new cases, where nearly 92% of people are fully vaccinated. Australia has been able to contain the spread of Covid Infections despite the Delta outbreak. Months of lockdown were implemented in Sydney and Melbourne.

There were only about 760 confirmed cases and 7.5 deaths per 100,000 people, according to data from the World Health Organisation, far lower than many other developed nations. Comparatively, the United Kingdom has had more than 14,000 confirmed cases and 211 deaths per 100,000 people and neighboring New Zealand reported 172 new cases. As of Friday, 83% of the Pacific nation’s population has been fully vaccinated.