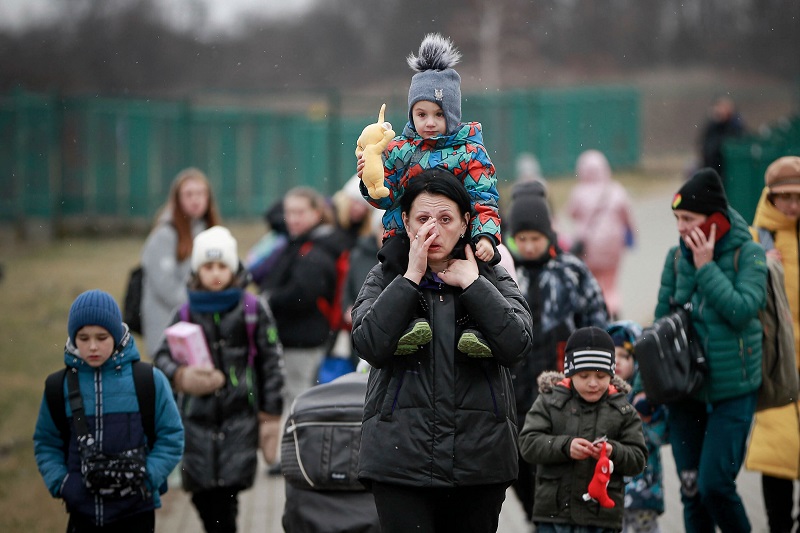 Ukraine -Another attempt to evacuate trapped civilians in Ukraine. Russia, in a major breakthrough, has declared a ceasefire in 4 key cities of Ukraine – Kyiv, Kharkiv, Mariupol, and Sumy. The ceasefire will come into effect starting Monday at 10 am (Moscow time) to allow evacuation of scores of trapped civilians, according to Sputnik, the Russian media. Sputnik added that the move came after a request from France’s President Emmanuel Macron.

Earlier on Sunday, French President Macron spoke to Russian President Vladimir Putin and discussed about “preserving the integrity of Ukraine’s civilian nuclear plants”. Demands such as ceasefire and civilian protection were also discussed.

But despite of announcement of a ceasefire and the opening of humanitarian corridors in multiple areas by Moscow, heavy shelling continues by Russian armed forces in cities located in centre, north and south of Ukraine. “Russia continues to carry out rocket, bomb, and artillery strikes on the cities and settlements of Ukraine,” the General Staff of Ukraine said. “The invaders continue to use the airfield network of Belarus to carry out air strikes on Ukraine.”

A Russian task force said that a ceasefire would start on Monday morning, which is the 12th day of the war, “for civilians from Kyiv, the southern port city of Mariupol, Kharkiv, Ukraine’s second-largest city, and Sumy”. It is still not clear from the statement if shelling would be stopped beyond the areas mentioned or when the ceasefire would end.

Russia and Ukraine had agreed twice for a ceasefire for creating safe evacuation corridors for civilians in Mariupol and Volnovakha. But the ceasefire was abandoned after Russia resumed shelling on the cities. “Instead of humanitarian corridors, they can only make bloody ones,” Ukrainian President Volodymyr Zelenskyy said Sunday. “Today a family was killed in Irpin. Man, woman, and two children. Right on the road. As in a shooting gallery.”

A third round of peace negotiations are scheduled to take place on Monday, March 7 between Ukraine and Russia. During the day, Indian Prime Minister Narendra Modi too is scheduled to speak with both Russian and Ukrainian presidents.