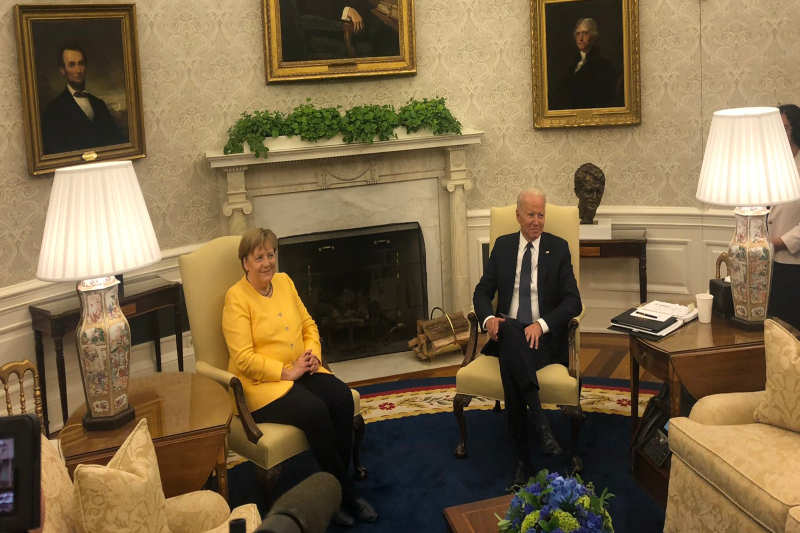 As the German Chancellor Angela Merkel prepares to step down as the leader of the European country, she was greeted at White House on Thursday by US President Joe Biden kickstarting bilateral meetings between the two leaders. This is also the concluding visit of Merkel to the US in capacity of the leader of Germany. This visit also marks an attempt from Biden to further bolster relations with US allies.

The two leaders met at Oval Office before proceeding to a joint press conference. Biden and Merkel spoke about importance of alliance between US and Germany, and ways for strengthening it further. The leaders also vowed to work together and stand strong against Russian aggression as well as stand up against China’s exceeding anti-democratic actions.

It was an honor to welcome my dear friend Chancellor Merkel to the White House. In today’s meetings we agreed to the Washington Declaration — a document that affirms our shared commitment to democratic principles and pledges to apply them to meet the biggest challenges we face. pic.twitter.com/GzhaZCc9i4

Nord Stream 2 was another topic of discussion. Biden reiterated his concerns of the major pipeline, that is near completion, that will run between Germany and Russia under the Baltic Sea. Merkel agreed with Biden on the belief that the energy should not be used by Russia as a weapon. During the joint press conference Biden said, “We stand together and will continue to stand together to defend our eastern flank allies at NATO against Russian aggression.”

US has long argued that Nord Stream 2 can be a threat to European energy security by making it overly reliant on the Russian gas project. This will give Russia a leverage to exert pressure politically on vulnerable European nations, Ukraine in particular. Merkel tried to downplay the topic by noting that the pipeline is an addition to Ukraine pipelines and not a replacement of the same.

President Biden and Chancellor Merkel were unanimous on standing up against China and any other country that work to undermine free society and expression. They vowed to preserve democratic and universal rights of people across the world.

Travel discussions due to Covid-19 pandemic was also discussed by the leaders. President Biden said that when it would be safe to lift ban on traveling from Europe to US was a discussion with Madam Merkel.

“It’s in the process now. And I’ll be able to answer that question to you within the next several days, what is likely to happen,” he said. Biden added that his team would further assess the pandemic condition and analyze when it would be safe to lift restrictions.

Biden also took this opportunity to pay tribute to Madam Merkel, the second longest serving Chancellor of Germany, as she nears the end of her political career. Standing by Merkel, Biden said, “On a personal note, I must tell you I will miss seeing you at our summits.”

After four years of divisive leadership by former US President Donald Trump, this visit by Merkel highlights efforts by Biden to strengthen ties with the US allies. The two leaders have worked with each other for years and have found a supporter in the other on a vast arena of subjects.

Starting the meeting in Oval Office, Biden said, “The cooperation between the United States and Germany is strong and we hope to continue that, and I’m confident that we will.”