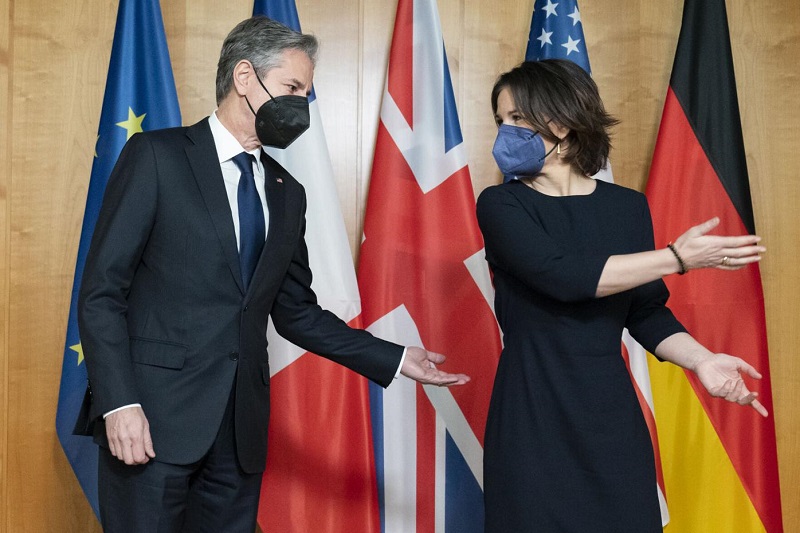 Russia is prepared to launch an invasion of Ukraine any time soon, and the world’s focus is on any kind of development. The United States has been trying to diffuse the conflict through diplomatic talks as well as threats to impose sanctions. Replying to Russian aggression by force from America in support of Ukraine isn’t out of question too. In the same direction, US Secretary of State Antony Blinken has issued an amplifying warning to Moscow over the Ukraine invasion. “If a single additional Russian force goes into Ukraine in an aggressive way, as I said, that would trigger a swift, a severe and a united response from us and from Europe,” Blinken said on Sunday while talking to CNN’s Dana Bash on “State of the Union”.

Last week President Biden had clarified his stand on Russia’s action – any Russian troops crossing the Ukrainian border would be treated as an invasion. Last week Blinken too underlined that the Russian invasion of Ukraine would be “met with a severe and a united response”, after his meeting with Russian Foreign Minister Sergey Lavrov.

Why is Biden administration showing unwillingness to impose pre-emptive sanctions on Moscow?

Biden administration has been questioned lately over why it is not imposing pre-emptive sanctions on Moscow, even after urging of Ukraine’s President Volodymyr Zelensky. Defending the administration’s stand on this, Blinken said, “When it comes to sanctions, the purpose of those sanctions is to deter Russian aggression.” He added, “So if they’re triggered now, you lose the deterrent effect. All of the things that we’re doing, including building up in a united way with Europe, massive consequences for Russia, is designed to factor into President (Vladimir) Putin’s calculus and to deter and dissuade them from taking aggressive action, even as we pursue diplomacy at the same time.”

Meanwhile, the United States Department of State has ordered all American personnel’s families at US Embassy in Kyiv to leave the country amid increasing fears of invasion. It added that non-essential embassy staff could leave Ukraine at US government expense. The US officials have stressed that the embassy in Kyiv will remain operational and that the announcement on Sunday urging families to leave Ukraine does not amount to an evacuation. “Military action by Russia could come at any time,” the US embassy said. Officials “will not be in a position to evacuate American citizens in such a contingency, so US citizens currently present in Ukraine should plan accordingly,” it added.

Moscow has rejected a claim by the United Kingdom that alleges Kremlin is attempting to replace the government in Kyiv with a pro-Russia government. Britain has further claimed that former Ukrainian lawmaker Yevheniy Murayev is a potential Ukrainian leader candidate, which too has been rubbished by the Russian foreign ministry on Sunday.

Biden warns Russia about Ukraine invasion, says US will resort to personal sanctions

On Saturday, Britain’s Foreign Office also named many other Ukrainian politicians for having alleged links with Russian intelligence services. Those politicians include Mykola Azarov, a former prime minister under Ukrainian President Viktor Yanukovych, who was ousted in a 2014 uprising, and Yanukovych’s former chief of staff, Andriy Kluyev.

Furthermore, US Department of State has issued an advisory to all its citizens, “Do not travel to Ukraine due to the increased threats of Russian military action and Covid-19. Exercise increased caution in Ukraine due to crime and civil unrest. Some areas have increased risk.” The travel advisory for Russia was also updated, “Do not travel to Russia due to ongoing tension along the border with Ukraine, the potential for harassment against US citizens, the embassy’s limited ability to assist US citizens in Russia, Covid-19 and related entry restrictions, terrorism, harassment by Russian government security officials, and the arbitrary enforcement of local law.”