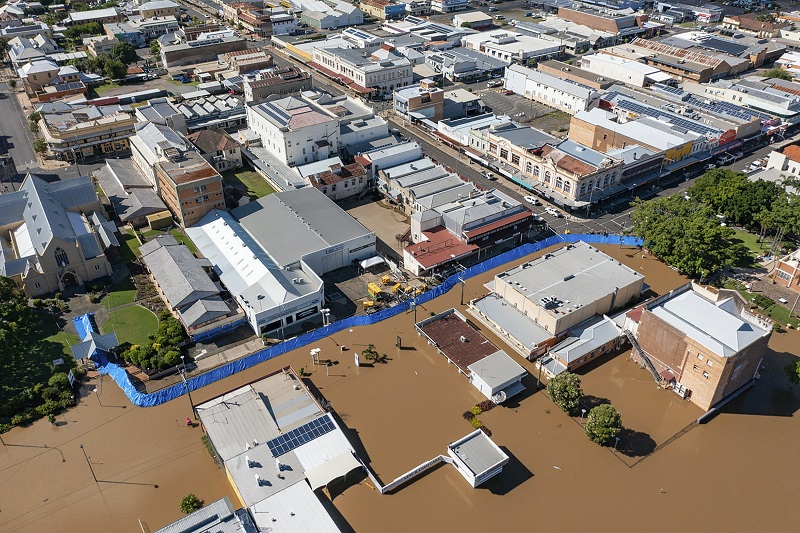 worst floods in decades force scores of australians to evacuate

Worst floods in decades force scores of Australians to evacuate

Australia – Southeast coast of Australia is witnessing worst floods in decades, already claiming nine lives. Thousands of Australians in the region have received an official order to evacuate their homes by Tuesday and another large number have been told to prepare to flee.

Recent days have been a nightmare as some of the residents have spent hours on their roofs trapped as a river in the town of Lismore, New South Wales recorded fast-rising water levels. “A police rescue officer had saved an elderly woman from such a roof space that was almost filled with water,” Lismore State Emergency Service Commander Steve Patterson said. “He dived in through a window, noticed the manhole cover was open, when he checked, found a 93-year-old lady with about 20 centimeters (8 inches) left of space before the water hit the top,” Patterson told Australian Broadcasting Corp.

Nearby town of Woodburn had dozens of cars stuck on a bridge on Monday night as both the bridge approaches had been submerged in flood waters. Early Tuesday around 50 people were rescued from the bridge. “We had no capabilities to get them off in the dark so we just had to make sure that they bunkered down and we went in this morning and got them all out,” Woodburn State Emergency Services Commander Ashley Slapp said.

Australia is currently witnessing the worst floods in decades with the flood waters moving south from Queensland into New South Wales. New South Wales Premier Dominic Perrottet said that around 1,000 people had been rescued in his state by Tuesday and more than 6,000 calls were still there that need help. “We’ll be doing everything … we can to get everybody to safety and get these communities right across our state back on their feet as quickly as possible,” Perrottet said.

The latest rainfall in the region has been described as “astronomical” by government meteorologist Jonathan Howe. Lesley Hughes, an Australian academic and former lead author of the U.N. IPCC assessment reports in 2007 and 2015, said, “We can see that our emergency services are struggling already to cope with the floods in northern New South Wales with people stranded on roofs without food for more than 24 hours.”