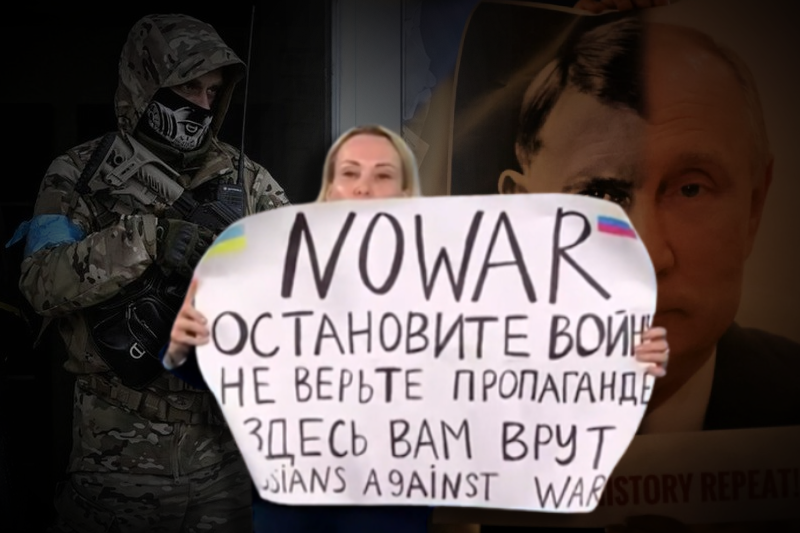 stop the war banner telecasted amid live program in russia

‘Stop the War’ banner telecasted amid live program in Russia

Russia -Amid an ongoing program in Russia’s state TV news, an anti-war protestor snooped in the studio with a banner stressing on no war.

On Monday, an anti-war protest interrupted the state news broadcast program in an attempt to make their stand against war in Ukraine. The protestor was appreciated for the effort given the new channel ownership is in the Russian government’s hand.

While the whole world is criticizing the war that Russia initiated towards Ukraine, Russia seems to conveniently neglect the remarks and keeps going ahead with its motives. The civilians of the country finally made their stance clear through social media as well as protests that they do not support war in any way.

The video since then went viral on social media especially after several news channels telecasted it during the broadcast. The footage showed a woman carrying a sign that read “Stop the war. Don’t trust the propaganda.” This happened while news presenter Yekaterina Andreyeva was hosting the live program.

The protestor was found to be Marina Ovsyannikova and she was detained post the act by the Russian officials. The woman herself is an editor working with Russia’s Channel One, an independent Russian monitoring group.

In a separate video posted by OVD-Info, the anchor woman had said that her father is Ukrainian while her mother is Russian. She wants them to be respected and hence can relate to the issue, asserted the organization. “What is happening in Ukraine now is a crime, and Russia is the aggressor,” she said.