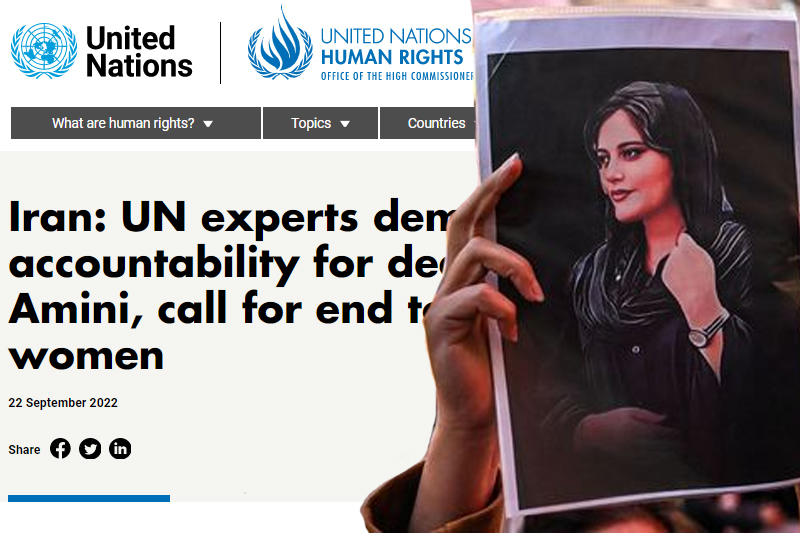 UN independent human rights experts have strongly condemned the death of Mahsa Amini, a 22 year old in police custody after she was arrested by Iran’s moral police for failing to wear hijab “properly”. She was then sent to a “re-education centre” where she was allegedly tortured by police leading to her death. “We are shocked and deeply saddened by the death of Ms. Amini,” the UN human rights experts said in a statement.

“She is another victim of Iran’s sustained repression and systematic discrimination against women and the imposition of discriminatory dress codes that deprive women of bodily autonomy and the freedoms of opinion, expression and belief”, the experts added.

The human rights experts have further denounced the authoritative regime of Iran that gives full support to the country’s security forces who are known to be violent on peaceful protesters, human rights defenders and activists. Ms. Amini’s death has triggered protests and demonstrations against the Iranian regime headed by President Ebrahim Raisi for the continuing repression of human rights of all, especially women.

🇮🇷#Iran: UN experts strongly condemn death of 22-year-old #Mahsa_Amini, who died in police custody after her arrest for wearing an “improper hijab.”

They call for accountability & end to violence against women & peaceful protesters.

“We strongly condemn the use of physical violence against women and the denial of fundamental human dignity when enforcing compulsory hijab policies ordained by State authorities,” the experts said. “We call on the Iranian authorities to hold an independent, impartial, and prompt investigation into Ms. Amini’s death, make the findings of the investigation public and hold all perpetrators accountable.”

Mahsa Amini was arrested by morality police of Iran on September 13 and was beaten fiercely as she was taken into custody. This however, has been denied by Iranian authorities who have claimed that she died of heart attack. Amini had reportedly collapsed into coma at the Vozara Detention Centre, a “re-education centre” and she later succumbed to injuries in hospital on Friday, 16 September.

In response to the nationwide protests and condemnation globally, internet has been disrupted in Tehran, Kurdistan provinces, and other parts of Iran – making this the third widespread internet shutdown in Iran recorded there over period of past 12 months. “Disruptions to the internet are usually part of a larger effort to stifle the free expression and association of the Iranian population, and to curtail ongoing protests,” experts noted.

“Iran must repeal all legislation and policies that discriminate on the grounds of sex and gender, in line with international human rights standards,” the independent human rights experts underscored.