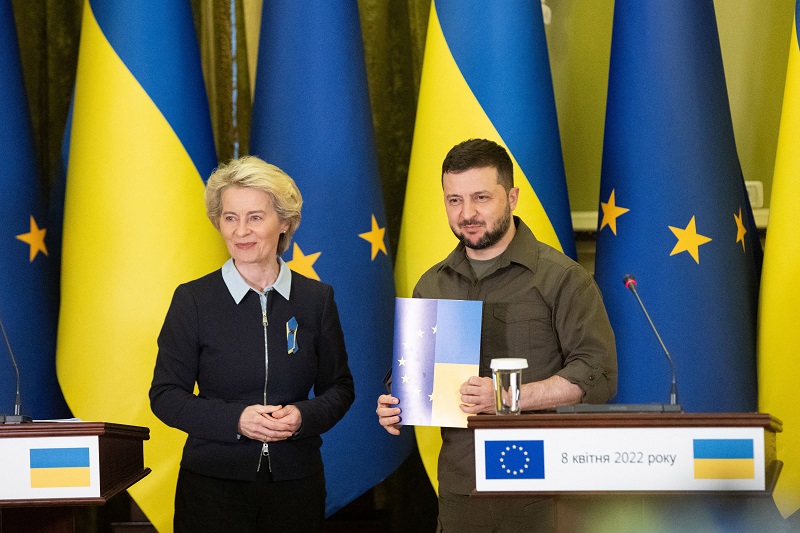 Ukraine has completed a questionnaire that will form a starting point for the European Union (EU) to decide on membership for the country.

The President of the European Commission handed the questionnaire to Zelenskiy while she was visiting Kyiv on April 8.

The deputy head of President Volodymyr Zelenskiy’s office, Ihor Zhovkva, said Sunday that the document had been completed by the Ukrainian side. Speaking to the Ukrainian public broadcaster, Zhovkva said the European Commission needed to issue a recommendation on Ukraine’s adherence to the necessary membership criteria.

“We expect the recommendation to be positive. Then, the ball will be on the side of the EU member states,” he said.

Zhovkva added that Ukraine expected to acquire the status of a candidate country to accede to the EU in June during a meeting of the European Council meeting.

The European Council is set to meet on June 23, as per the Council’s schedule on its website.

“Next, we need to start accession talks. Once we hold those talks, we would be ready to talk about Ukraine’s complete membership in the EU,” Zhovkva said.

On the other hand, fresh air strikes hit the Ukrainian capital on Saturday, leaving one person killed and several wounded in Kyiv. According to Mayor Vitali Klitschko, air defences have been trying to protect people, “but the enemy is ruthless.”

Since Russian forces ended their siege of areas north of the Ukrainian capital, a few residents of towns such as Bucha have started the massive task of rebuilding their lives.

Although most people are yet to return, there’s a small, hardy group that is trying to pave the way for others to get back.

But making these places safe again will be a huge job.