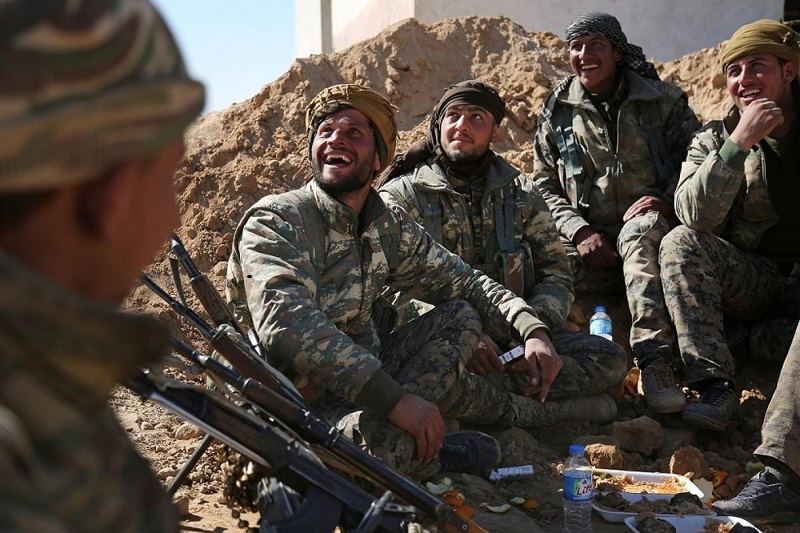 Northern Syria’s areas that are under control of Turkish backed Free Syrian Army (FSA) are increasingly under affliction of confrontations and clashes between various armed factions. This infighting has resulted in increased instability in the residential neighbourhoods inside cities and towns where these clashes take place most commonly. These cities include Jarablus, al-Bab, Afrin, Ras al-Ain, Azaz and others.

Obeida Hayyan, a journalist from the city of Afrin, said, “The clashes between FSA factions occur almost daily in the city of Afrin and its countryside for various reasons, such as individual disputes between members of different factions in case of a traffic accident for instance. Any friction can quickly turn into an armed clash engaging several faction members.” He added, “Many confrontations and clashes start out with a dispute between two individuals from different factions. This dispute culminates into a fight and a wide-scale armed clash. The problem is that these clashes are erupting in residential neighborhoods and civilians are getting injured. There is a chaotic proliferation of arms amid the absence of any deterrent punishment to prevent faction members from using their weapons inside residential neighborhoods.”

The prime reason behind the infightings and confrontations appears to be a struggle for power and occasional crossings and influence in authorities.

Meanwhile, in the city of al-Bab a protest was carried out calling for an end to the bloodshed due to infighting during the Muslim holy month of Ramadan. Protesters held banners with slogans that read “internal fighting is a betrayal of the revolution,” and “The blood of the revolution’s youth is too precious to be shed in infighting.”

Journalist Adnan Faisal was in the Awlan area near al-Bab when the clashes broke out between Third Corps members. He said, “This is so sad. This phenomenon has emerged since the establishment of the FSA in 2012, and is still ongoing. Instead of firing bullets at the Assad regime forces, FSA members are killing each other.”