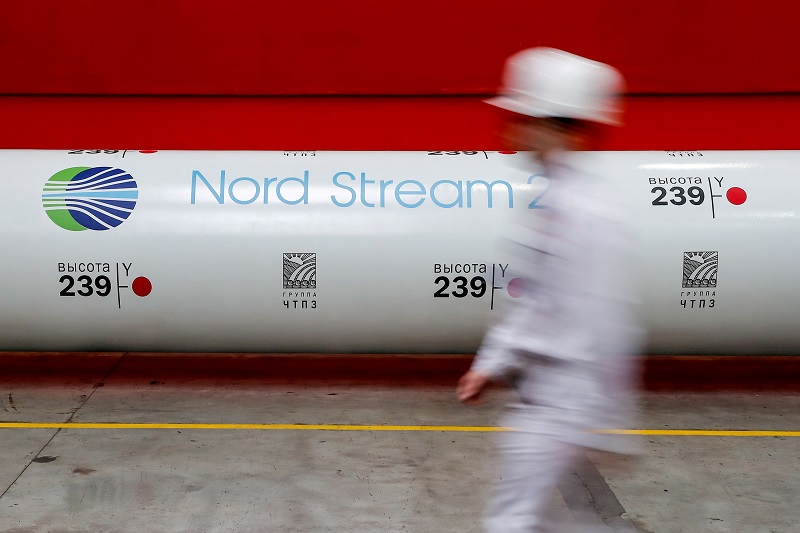 file photo: the logo of the nord stream 2 gas pipeline project is seen on a pipe at the chelyabinsk pipe rolling plant in chelyabinsk, russia

Russia – As Europe has been fighting an open war against fossil fuel emissions, Russia has taken its bridling to manic proportions, by curbing access to natural gas into regions of Europe, as they prepare for another environmentally challenging winter.

Russia supports more than 40 percent of the European Union’s natural gas imports. EU has suffered under the reeling prices of fossil fuels. But Kremlin now sees this as an opportunity to extend a helping hand of energy. In return, it might want to pressurize the main European players like Germany and Brussels to quickly approve the Nord Stream-2 pipeline.

Germany has been supporting like the US Ukraine’s cry for the support over curbing the Nord Stream 2 pipeline project that threatens their sovereignty. Off late, the Russian state-owned energy giant Gazprom decided not to fill its European storage facilities. This automatically contributed to high prices, according to Trevor Sikorski, head of global gas at Energy Aspects, a research firm based in London.

In a televised interaction between Putin and his energy minister, his assertion automatically affected gas prices in the market. He said, “Let’s think about a possible increase of the supply on the market, but we must be careful in doing so.” The insecurity could be a real one for European Union after all.

As of now, the European Commission is looking into the claim that Russia is manipulating the flow of gas to push up prices. But they have reached no conclusion. Germany’s outgoing Chancellor Angela Merkel, whose government has backed Nord Stream 2 and called it a business deal, not a geopolitical strategy, dismissed charges that Russia is partly to blame for the rise in European gas prices.

The United States had been opposing the Nord Stream-2 project not for environmental reasons but for the simple reason that EU would become dependent on Russia natural gas. As Russia has rumoured to hold back its supply of natural gas, it has been maintaining the sanctity of its contractual obligations.

Political analysts believe Kremlin has resisted delivering significantly more even as demand increasingly outpaced supply. That has exacerbated an energy crisis fueled by a variety of factors, including the increase in demand as the world comes out of the pandemic, a cold end to last winter that left storage tanks low, higher demand from China and low wind speeds in Europe that reduced renewable energy production.