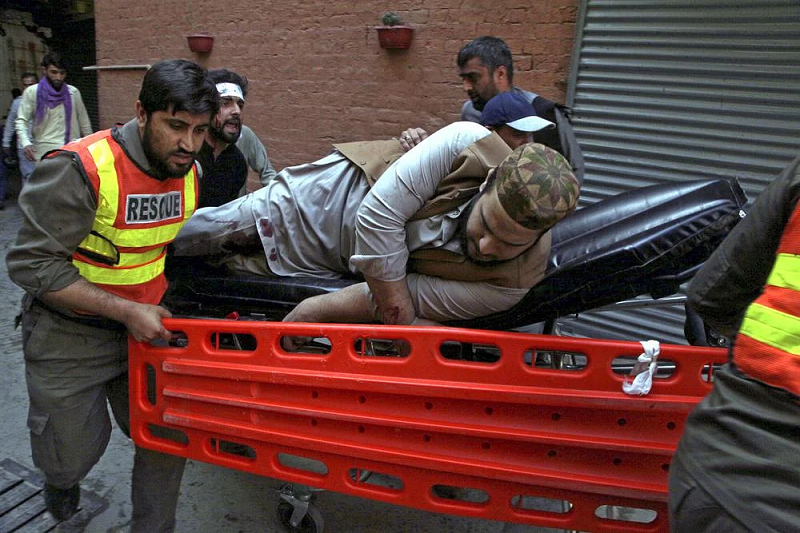 Pakistan -A Shiite Muslim mosque in Peshawar was hit on Friday morning with a powerful bomb while scores of worshippers were offering their prayers in the northwestern city of Pakistan. The explosion killed at least 30 and left dozens wounded with many in a critical situation. Waheed Khan, a local police official has said that the explosion occurred as many worshippers had gathered for Friday morning prayers in Peshawar’s old city’s Kucha Risaldar mosque. Soon after the explosion, ambulances rushed the wounded to Lady Reading Hospital.

Violence at the mosque started when two armed men opened fire on police officers outside the mosque. One policeman and one attacker were killed in the crossfire. One more police officer was reported injured. Soon after the second attacker ran inside the mosque and then detonated the bomb. At that time there were at least 150 worshippers inside the mosque, said, eyewitnesses. An eyewitness told an attacker dressed in black entered the mosque building after shooting a policeman. “After that, he quickly entered the [mosque’s] main hall and blew himself up in front of the pulpit. Following this, there were bodies and injured people lying everywhere,” he said.

Peshawar Senior Superintendent of Police Operations Haroon Al-Rasheed said it looked like a suicide attack. “The hall was filled with people; they were on the bottom and top floors; the incident took place at 12:55 pm.”

Later after the attack, the Islamic State terrorist group claimed responsibility of the attack. IS said in a statement that the suicide bomber was from neighbour country Afghanistan. The IS affiliate, known as ISIS – Khorasan, is headquartered in eastern Afghanistan. Taliban rulers in Afghanistan, who also are fighting the group, have condemned the attack. “We condemn the bombing of a mosque in Peshawar, Pakistan. There is no justification for attacking civilians and worshipers,” the Taliban Deputy Minister for Culture and Information Zabihullah Mujahid tweeted.

Interior Minister of Pakistan, Sheikh Rashid said the attack was “a conspiracy to destabilize Pakistan at the time when an international [Australian] cricket team is visiting the country.”