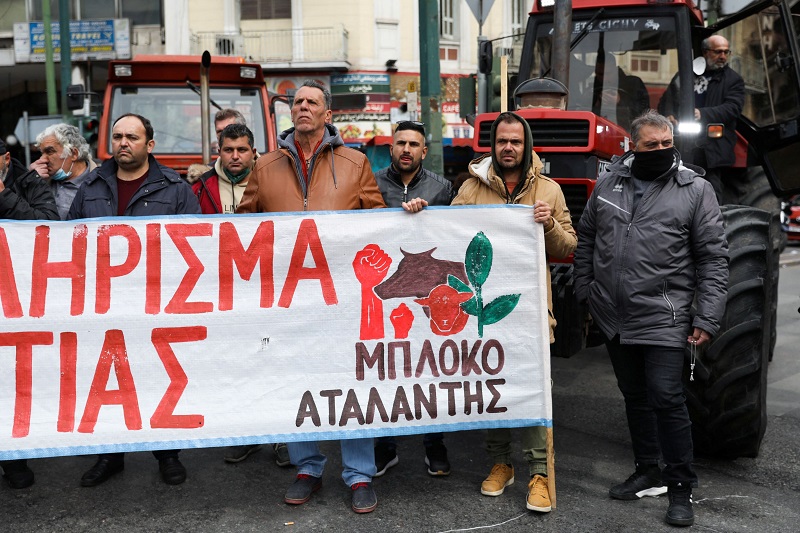 greek farmers demonstrate against fuel and fertilizer costs, in athens

On Friday, hundreds of Greek farmers staged a protest in Athens, demanding more significant subsidies and tax cuts to combat the hike in fuel and fertilizer prices that have soared since Ukraine’s invasion by Russia.

The protesting farmers said the fuel costs were so high that they would be forced to produce less and surge prices for consumers.

Farmers from across Greece added to the rally. Some protesters hung black flags on sticks or shepherd’s crooks.

It is pertinent to state that the farmers staged weeks of protests over high energy prices at the start of this year.

Meanwhile, the government has spent about 3.7 billion euros since September to protect farmers, households and businesses from soaring energy and fuel costs. The administration cut a sales tax on fertilisers by a whopping 46% on Thursday and announced that it would be lowered further.

Farmers said the measures wouldn’t go far enough as everything had become too expensive, from animal feed to fuel.

Since Russia is a significant producer of phosphate-, potash-, and nitrogen-containing fertilisers, its adventure is taking a toll on the world of economics.

Russia is a leader in fertiliser exports and accounts for 13% of global output.

This month, Russia’s minister for trade and industry told the fertiliser producers to halt exports.

As a result of Moscow’s conflict with Kyiv, the United Nations food agency has said that international food and feed prices would rise by up to 20%.

“This year, our survival is really at stake,” said one protester. “The cost of production, agricultural supplies, electricity, and fuel needs to have a check.”

“The situation is unbearable,” said another farmer. “We can’t work in our fields. We can’t put gas in our vehicles. There will be a problem with food supplies in the country.”