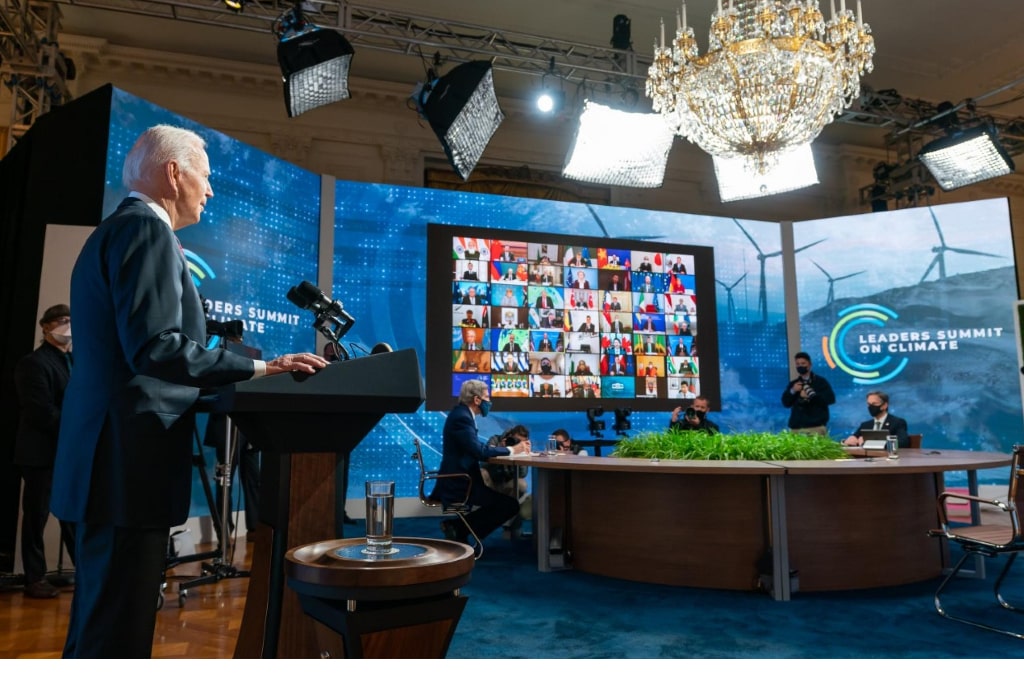 Climate Summit: China and India's super-growth, the US cut emissions by 50% by 2030

Climate Summit: China and India’s super-growth, the US cut emissions by 50% by 2030

The climate summit concluded on Friday. The meeting highlighted the super growth of giants, such as China and India, the Russian aims and the demands of Brazil. Numbers and contradictions that leaders will have to face. The United States has pledged to cut emissions by 50 to 52 percent from 2005 levels within this decade. And it is with this announcement that Biden welcomed the numerous heads of state invited to the summit organized to celebrate Earth Day. The first of these event, April 22, 1970, was celebrated by Richard Nixon by planting a tree on the White House lawn. Fifty years later, during which the world fell apart, it was necessary to organize something more incisive. Despite a brief pause due to lockdowns, emissions rose aggressively in 2021. The guests, present online, were over 40 and among them also Angela Merkel, Boris Johnson, Vladimir Putin, Narendra Modi, the Indian Prime Minister, Scott Morrison, Prime Ministers of Australia, France, Italy, and of course Chinese President Xi Jinping.

An agreement on this issue that includes China would be a turning point because it could result in a commitment from the nations that have so far contributed most to climate change. The goal is ambitious: on the part of the US, it is a way to demonstrate a decisive break with Trump’s previous denial policy and to communicate a return to an issue that had been abandoned. From an international perspective, Biden, who has been focusing on climate since he took office, hopes to encourage other countries to do the same, ensuring that the Cop26 summit in Glasgow, which will take place in November, is not a failure but a turning point.

The summit was organized in five sessions. The first, of a general nature, was related to the need to confirm the limits of Paris at COP 26. The second was dedicated to the financial efforts needed to help countries in difficulty and the opportunity to move existing proven funds to finance the transition. The third, divided into two rounds, in the first dealt with the problem of adaptation to climate change already underway, in the second with the problems of energy, economic and social security. The fourth analysed the critical role of technology and private investment. The fifth sessionfocused on the economic benefits of action against climate change and the creation of new jobs.The event has been opened and closed by videos of suggestive images regarding the need to fight the climate crisis and to act immediately.

Among the interventions, XI Jinping made a speech very in tune with the style of the introductions, underlining the importance of harmony between man and nature and the need to protect the planet, “as we would protect our eyes”. Unlike the US, it is committed to achieving zero emissions only in 2060. But if the commitment of the two worst polluters were also followed by India and Russia, it would be a turning point.

Putin, however, has focused more on carbon sequestration projects. Macron argued that 2030 should become the new 2050. Sebastián Piñera, President of Chile, stressed that thanks to the sun in the Atacama Desert and the winds that blow in Patagonia, he can offer hydrogen production to the whole world green. Draghi, who was unable to illustrate any commitment, argued that Covid is an opportunity to create a green economy, probably referring to the Recovery plan, in which, however, so far there are no decisive changes of course, but rather financing for major works.

Interesting was also the speech by Lotay Tshering, prime minister of Bhutan, a state that has replaced the value of the gross domestic product with that of gross domestic happiness. They are also zero-emission. And that of Iván Duque Márquez, president of Colombia, who, boasting just 0.37 of global emissions, encouraged leaders to follow their example.In what seemed to be a climate of great cooperation, the partnership between private and public sectors was repeatedly recalled as the emergencycannot be solved by government initiatives only.

Among the powerful, XiyeBastida, an activist of Fridays for future of Mexican origins, who did not mince words: “we cannot continue to only have summits and discussions”, he said adding that “we must reach zero by 2030, not 2050 and use this possibility to change the world, not just reduce emissions.” Meanwhile, Greta Thunberg spoke in the US Chamber with even more decisive words. “You stated that we are not treating this crisis as a crisis and that there are no magic numbers about reducing emissions. The declarations are still too vague and far from real objectives”. The young activist stressed.

However, some results have already arrived, and they far exceed American efforts. England last week promised to cut emissions by 78 percent compared to 1990 by 2035, the European Parliament confirmed that Europe will become climate neutral by 2050, to reduce emissions by at least 55 percent, compared to 1990, by 2030.Going into reality, however, could prove complicated. Major lifestyle changes are to be expected. Coal must disappear entirely, while all means of transport must become electric.Many countries in the southern hemisphere have received the initiative with perplexity. They wonder if there will be the same commitment to helping those who are most suffering from the effects of global warming. It is no coincidence that Tuntiak Katan, the coordinator of the Global Alliance of Territorial Communities, reiterated the need for the recognition of land ownership rights of indigenous cultures.

United Nations Secretary Antonio Gutiérrez took the opportunity to reiterate that the planet is on red alert, “we are on the verge of an abyss, and thanked Biden for having emphasized the issue,” he warned. The proposal that comes out from the Summit is above all to relaunch the economy, entrusting hopes to technology, the only one capable of creating a market capable of driving the new vision with solid financial support. In 2020, investments in clean technologies have already reached the value of 500 billion dollars. Forty-five percent of the targets will come from new technologies that are still in development, said Secretary of Commerce Gina Raimondo introducing Ana Borg CEO of Vattenfall, the company that produces energy in Sweden and built the first steel mill that does not use fossil fuels in the city of Lulea. The cost of inaction – Biden pointed out – is showing its effects. “We don’t have to wait any longer and the next decade will be decisive”. The US president explained. The transition, according to Joe Biden, is above all an opportunity to create new jobs, concluding with the vision of a new peace in the world: one that leads all countries to work for the same goal, a goal that serves all.