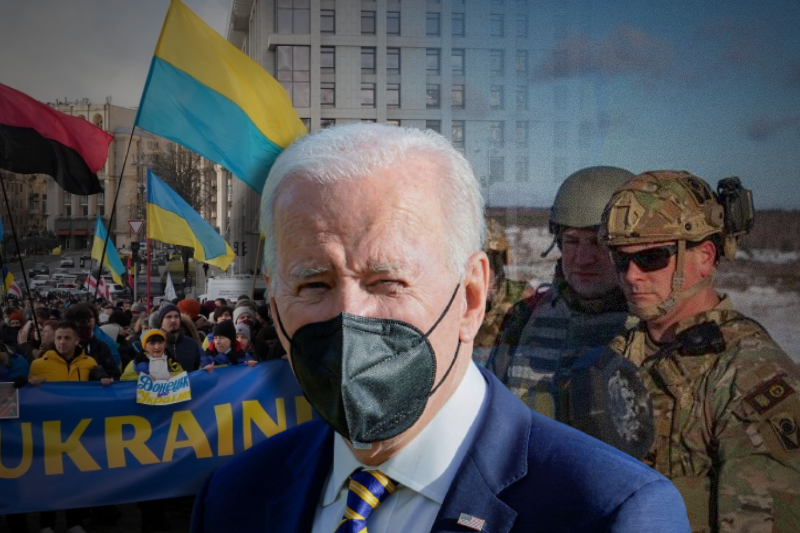 Ukraine -Despite claims by Kremlin that it has withdrawn a large number of troops from the border with Ukraine, United States President Joe Biden has said that around 150,000 Russian troops are gathered at the border in a rather “threatening position”. Claims by Russia that it has pulled back troops “would be good, but we have not yet verified that,” Biden said. “Indeed, our analysts indicate that they remain very much in a threatening position.”

Speaking from the White House through a televised address on Tuesday afternoon, Biden reiterated the choices with Russia – engage in talks to diffuse the situation or face severe repercussions if going forward with invading Ukraine. According to US intelligence, Russia can invade its neighbour as early as Wednesday. Volodymyr Zelenskiy, President of Ukraine, has called the day a “day of unity” and has urged all Ukrainians to sing the national anthem and fly flags at 10 am Wednesday.

Biden underlined again that he would “rally the world” to support Kyiv and oppose Moscow’s invasion, but noted that his role would be mainly economic and that he would not send in any US troops. “We’re not seeking direct confrontation with Russia, though I’ve been clear that if Russia targets Americans and Ukraine, we will respond forcefully,” Biden said. “If Russia attacks the United States or our allies through asymmetric means, like disruptive cyber-attacks against our companies or critical infrastructure, we’re prepared to respond.”

On Tuesday, Russian President Vladimir Putin had said of welcoming security dialogue with the West and that some military troops were being pulled back from the border near Ukraine. But this claim has not been verified by the US, said White House, adding that an invasion is a “distinct possibility”. Putin has said again of not wanting a war and that he is ready for negotiations to diffuse the situation. But his condition stands firm – assurance that Ukraine would not be permitted to join NATO. US and NATO has blatantly rejected the condition, however. Putin, at the same time, has refused a complete troops withdrawal saying the next moves of Russia would depend on how the situation unfolds.

Meanwhile, the West is watching closely all moves by Russia. UK foreign secretary, Liz Truss criticized Russia on Tuesday for its refusal to participate in talks called by Ukraine at the Organisation for Security and Cooperation in Europe (OSCE). “It is Russia that is the aggressor here,” she said in a statement. “The troops stationed on the border are a clear threat to Ukraine. The UK and our allies urge the Kremlin to withdraw its troops and enter discussions based on the proposals put forward by NATO to improve transparency and reduce risk.”