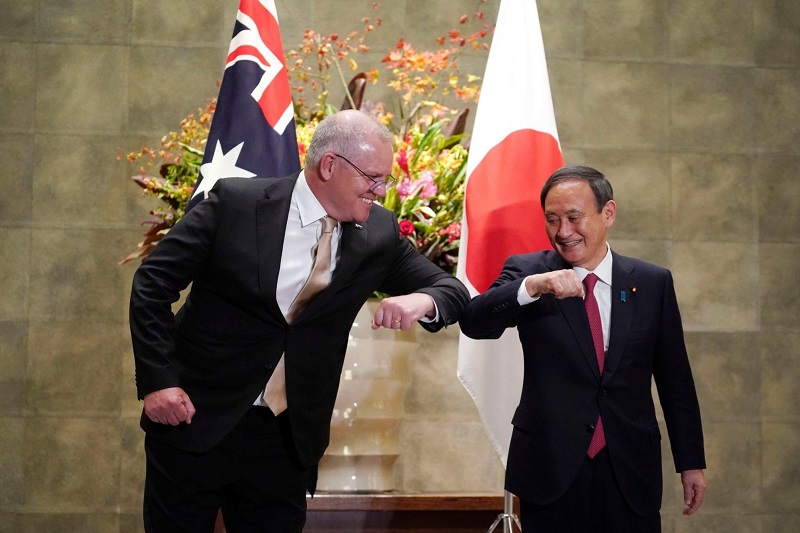 Australia is going all out to make friends with others, in response to China’s threats of bitter battle over the growing trade row. This time, Australia has chosen a more stable Asian partner- Japan.

Morrison and Kidisha have finally signed what is being called a landmark defense pact. Yesterday, in a virtual meeting, the two countries were able to decide to help each other through the ‘Reciprocal Access Agreement’, all amidst concern over China’s growing influence in the region. The pact was agreed upon virtually as the Japanese PM decided to take precautions and not travel amidst growing concerns over the Omicron spread in Japan.

Giving his remarks from the cabinet room of Parliament House during the ceremony, Mr Morrison said Japan was Australia’s closest partner in Asia, noting challenges in the region without directly mentioning China. Japan will help Australia develop advanced defense and security cooperation.

It is worth noting that this is the only one-of-a-kind agreement that Japan has held with any other country. Speaking over the uniqueness of the plan, Mr. Morrison commented, “And that says something about the level of trust and partnership, a partnership of equals, standing up for the security of the Indo-Pacific, and the values as democracies that we hold very dear.”

Speaking over its alliance with Japan, the Australian spokesperson feel that this deal indeed complemented other agreements such as the AUKUS submarine deal and $1bn military contract with South Korea. “This meshes together, it weaves together, this suite of agreements to ensure that Australia works with our partners to ensure that our region can be prosperous, can be safe, and can be open and can be free.” In response, as expected, the Chinese foreign ministry spokesman Wang Wenbin has warned that the new treaty should not “target or harm any third parties”. China has continued to try and increase its military power via sea to intimidate Australia. However it finds it suited to comment otherwise, if the latter wants to add some more muscle power to its Navy.