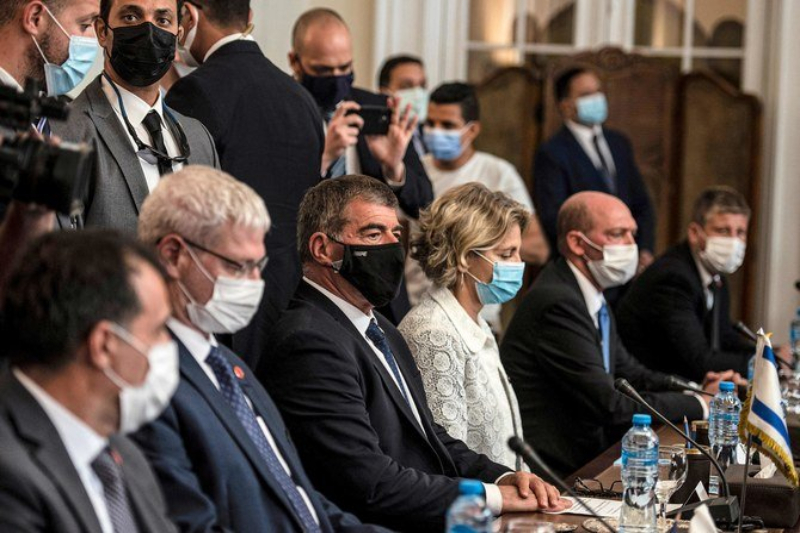 It is the first visit by Israel in a decade to Egypt. The Israeli Foreign Minister Gabi Ashkenazi visited Cairo, on the invitation of the Egyptian government which is trying to broker a peaceful resolution to the war like conditions being created in Gaza. He was in talks with his Egyptian counterpart Sameh Shoukry.

Meanwhile, the (almost) dictatorial PM of Israel Benjamin Netanyahu was met by Egypt’s intelligence chief Abbas Kamel in Jerusalem too. Netanyahu said they discussed regional security issues and how to prevent Hamas from siphoning off civilian aid to Gaza.

Brining in a religious sentiment, Sameh Shoukry told Ashkenazi there was a “need to take into account the special sensitivity associated with East Jerusalem, Al-Aqsa Mosque and all Islamic and Christian holy sites.”  Apparently, it has been confirmed that during the Ramadan period, the attacks were systematically made by Israeli security forces on worshippers in the mosque that lead to trigger of the Gaza conflict.

Egypt has its own reasons to broker peace between Israel and Palestine.  Political bigwigs feel there is more than the meets the eye. While on the surface, it would make sense to speak for the just cause of peace, but there is no more to it.

The war like condition has embarrassed some Middle Eastern countries who had brokered a peace deal with Israel last year, on the insistence of Donald Trump.

In 2014, Egypt brokered a fragile ceasefire after a devastating weeks-long war between arch-foes Israel and Hamas, the Islamist group which rules the densely populated Palestinian enclave. Egypt definitely wants to be noticed and the presence of its intelligence in talks with Israel is trying to make a point that it would liked to be the nodal point for peace talks.