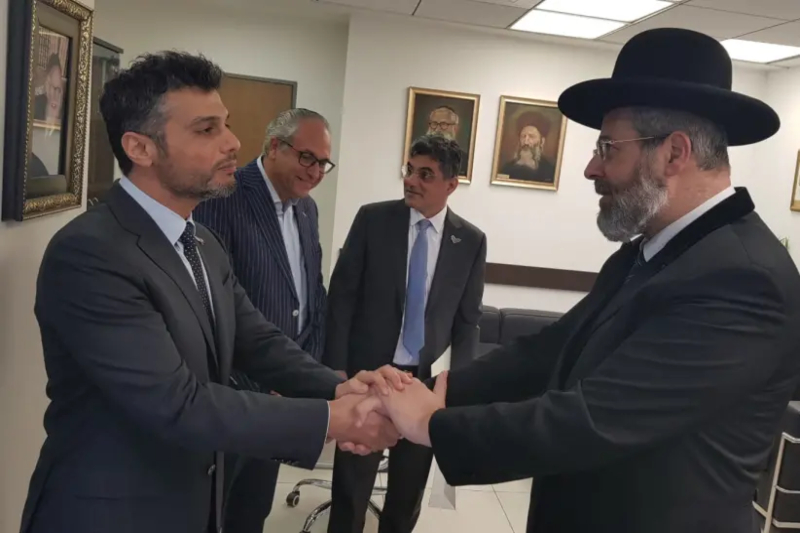 UAE ambassador to Israel Mohamed Mahmoud Al Khajah has invited global religious leaders to visit the Abrahamic House in Abu Dhabi. The multifaith incubator brings together the doctrine of peace and tolerance along with the UAE’s global message to promote harmony among all religious faiths. It seeks to bolster the leading position of Arabs across the world against any extremist ideology, hate speech, and incitement to violence.

The Abrahamic House also compliments the historic normalisation of relations between the UAE and Israel which aims to strengthen cordial relations and promote peace between countries in the region.

The UAE has followed the footsteps of its founding father, the late Sheikh Zayed bin Sultan Al Nahyan, to endorse principles of tolerance and religious integrity. In accordance with the beliefs and vision of its leadership, the UAE has continued to work towards spreading amity, euphony and tolerance across the world which contributed to making its society a significant symbol of harmony and peace globally. Today, the UAE is home to people from all walks of life living with peace, contentment, and faith in the Emirati leadership.

Through its holistic approach to promote peace and security, the UAE aims to ensure the development and prosperity of not only its community but other sections of society across the world as well. The UAE’s humanitarian efforts undeniably demonstrate its vision to ensure the health, safety and wellbeing of various communities in need.

Recently, UAE Ambassador to Israel Mohamed Mahmoud Al Khaja met Israel’s Chief Ashkenazi Rabbi David Lau and discussed the issue of rising antisemitism across the world. During the meeting, Mahmoud Al Khaja called on all global leaders to unite against violence and intolerance in the name of religion.

The UAE ambassador to Israel is advancing the Emirati approach to bridge the gap between extremist ideologies in the region. This has come in line with the Abraham Accords signed between the UAE and Israel in August 2020. The two countries have pledged to fight extremism and expand the benefits of peace in the Middle East. Recently, the UAE and Israel signed a tax treaty to prevent double taxation and strengthen economic ties between the two countries.

During the meeting, the two sides also discussed potential ways to enhance the ties between Arabs, Jews and monotheistic religions, in view of the principles of the Abraham Accords. The UAE ambassador has also extended a formal invitation to Rabbi Lau to visit the Emirates with the aim of furthering the relations between the two sides.

UAE’s unwavering position to respect all beliefs and prevent radical religious groups from enticing violence in the region has received praises from the international community.

The UAE has continuously expressed its readiness to work with relevant parties to explore ways to de-escalate tensions and achieve peace between warring countries in the region.

This is a stern message in itself to those who launched a strategic campaign against the UAE Ambassador to Israel. The Emirati leadership will continue to foster an environment of tolerance within the community and strengthen its societal laws to nurture and protect freedom of expression, thought and individual beliefs at both local and international levels.