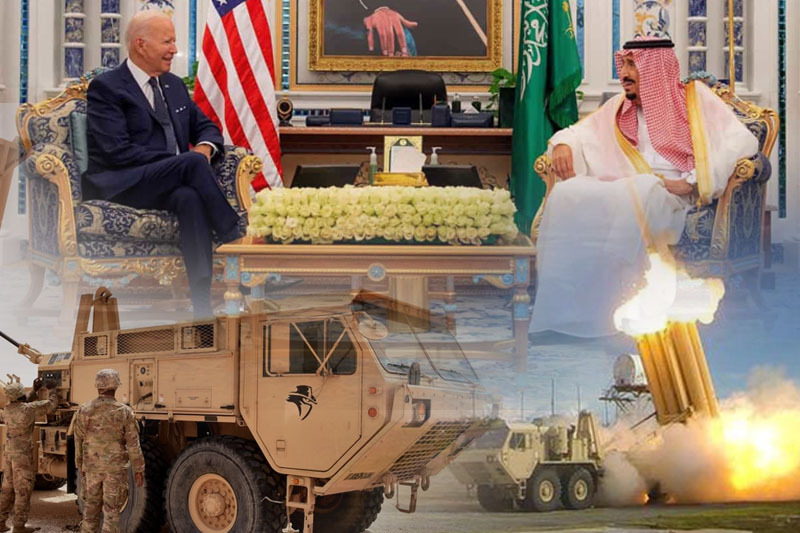 According to a statement released by the Department of Defense on Tuesday, the United States State Department has given its approval for a potential sale of Terminal High Altitude Area Defense (THAAD) missile interceptors to the United Arab Emirates and Patriot missile (Defence Patriot) interceptors to Saudi Arabia in separate deals that could total up to $5.3 billion.

These possible transactions, which would resupply crucial missile defense systems for the two countries, come just a few short weeks after President Joe Biden’s trip to the region in July. In a time when inflation is reaching levels not seen in the past four decades and when his approval ratings are under attack, Biden had hoped to reach an oil output pact that would bring down the price of gasoline.

The notice of the deals to the Congress of the United States does not mean that a contract has been signed or that discussions have come to a close, despite the fact that the State Department has given its permission. Notifying Congress as part of a procedure is sometimes the first public indication that negotiations regarding a potential agreement are taking place.

According to the Pentagon, the United States State Department has given its approval for the potential sale of 300 MIM-104E Guidance Enhanced Missile-Tactical Ballistic Missiles (GEM-T) for the Patriot missile defense system to the Kingdom of Saudi Arabia, along with support equipment, spares, and technical support. The planned agreement with Saudi Arabia will provide the Saudis with an additional 300 weapons while helping to replenish their “dwindling” stocks of Patriot missiles.

The United States Department of Defense has stated that Raytheon Technologies (RTX.N) is the primary contractor for the Patriot interceptors and equipment, which has a potential value of up to $3.05 billion.

Separately, as reported by the Pentagon, the State Department gave its approval for the potential sale of 96 THAAD missile defense system interceptors and associated equipment to the United Arab Emirates, along with spares and technical assistance.

Furthermore, Lockheed Martin (LMT.N) is the primary contractor for the THAAD interceptors and equipment, which has a potential value of $2.25 billion.

Under the terms of the proposed agreement, the United Arab Emirates would be given 96 missile rounds, two THAAD launch control stations, and two THAAD tactical operations stations. ​​​​​​​

During his own journey to Saudi Arabia in July to discuss the Iran nuclear deal, President Joe Biden stated that “the only thing worse than the Iran that exists right now is an Iran with nuclear weapons.”

It is noteworthy that missile defense capabilities of any kind are on their way to the region, particularly in light of a new agreement that was reached in June between Israel and a number of Arab nations to form a joint air defense network that will be led by the United States and will be known as the Middle East Air Defense Alliance (MEAD).

Israel will be able to coordinate its air defense capabilities with those of other Middle Eastern states, such as Saudi Arabia and the United Arab Emirates, thanks to MEAD.

The military forces of the two countries will coordinate their efforts to resist any strategic maneuvers carried out by Iran. This will make it possible for the new alliance to safeguard its member nations collectively from any attempt by Iran to strike the region with rockets, cruise missiles, or unmanned aerial vehicles (UAVs).

Although the proposed arms sales between the United States and Saudi Arabia and the United Arab Emirates have not yet been finalized, a notification by the Defense Security Cooperation Agency (DSCA) indicates that these deals have likely already been approved by the executive branch.

The next round of the negotiations will involve the United States Congress, which will have to decide whether or not it will approve the arrangements, including the quantities of weapons and the total amount that will be sold, or whether it would oppose them.