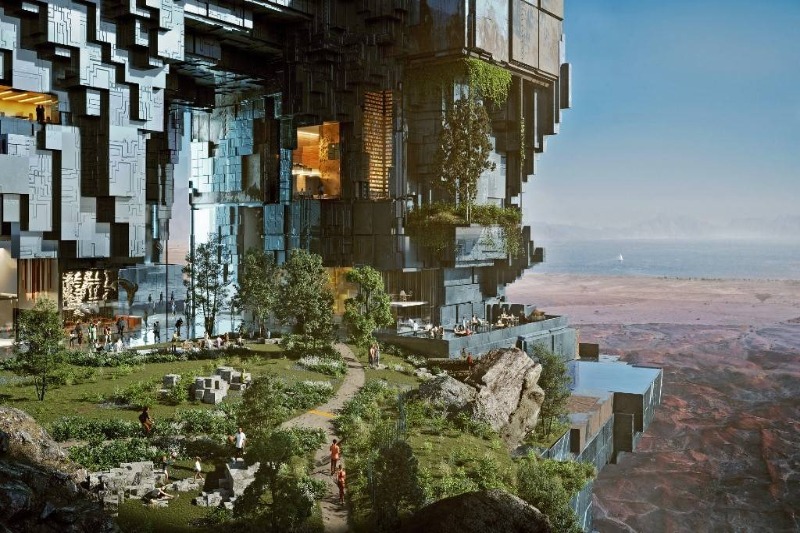 According to the most recent information released by the de facto ruler of Saudi Arabia, a future megacity will comprise two skyscrapers spanning a stretch of desert and mountain territory.

The Line, a parallel network of mirror-encased skyscrapers spanning over 170 kilometers, is at the center of the Red Sea megacity NEOM, a pillar of Crown Prince Mohammed bin Salman’s effort to diversify the economy of the Gulf kingdom beyond its reliance on oil.

Architects and economists have questioned the viability of NEOM ever since it was first revealed in 2017, thanks to its proposed flourishes such as flying taxis and robot cleaners.

And at a presentation on Monday night (July 25), Prince Mohammed laid out an even more audacious vision, picturing a car-free utopia that would become “by far” the world’s most liveable metropolis.

However, analysts pointed out that NEOM’s plans have shifted over the years, casting doubt on the feasibility of The Line’s construction.

Once called the regional “Silicon Valley,” NEOM is a biotech and digital center that spans 26,500 square kilometers.

Now, it’s a tool for solving what Prince Mohammed calls “liveability and environmental challenges” by rethinking urban life on a footprint of just 34 square kilometers.

According to Robert Mogielnicki of the Arab Gulf States Institute in Washington, “the concept has changed so much from its early conception that it is sometimes hard to tell its direction: scaling down, scaling up, or making an aggressive shift sideways.”

Though previous projections put the NEOM population at over a million, Prince Mohammed now predicts that it will reach 1.2 million by 2030 and 9 million by 2045.

A population boom of this magnitude is one of the steps Prince Mohammed has identified as essential if Saudi Arabia is to become an economic superpower and replace its current position as the world’s largest exporter of crude oil.

By 2030, the number of Saudis and foreigners residing in the country is expected to have doubled from their current total of about 34 million.

“It is for this reason that NEOM is being constructed: to increase Saudi Arabia’s capacity and attract more residents. Since we are starting from scratch, there is no reason to imitate established urban areas.”

The location will have “a year-round temperate micro-climate with natural ventilation,” according to a promotional video released on Monday. It will be fueled by 100 percent renewable energy.

The kingdom’s environmental promises in the past, such as its goal of zero carbon emissions by 2060, have been met with skepticism by those who care about the environment.

According to Torbjorn Soltvedt of risk intelligence firm Verisk Maplecroft, NEOM is ideally situated to take advantage of renewable energy sources like solar and wind. There are also plans in the works for the city to host the world’s largest green hydrogen factory.

Yet, “the overall feasibility of NEOM is still unknown given the extraordinary scale and cost of the project,” he noted.

The Line, at only 200 meters wide, is Saudi Arabia’s solution to wasteful and unrestrained urban growth, with its vertical stacking of houses, schools, and parks (a concept known as “Zero Gravity Urbanism”).

Aside from having “all daily needs” within a five-minute walk, residents will also have access to amenities such as outdoor skiing facilities and “a high-speed rail with an end-to-end transit of 20 minutes.”

Officials in Saudi Arabia have stated that they have no plans to lift the kingdom’s alcohol ban despite the fact that NEOM would function under its own foundation law, which is still in the works.

Though it was stated in May that NEOM would begin receiving regular flights from Dubai, the status of the megacity’s construction remains unknown.

Prince Mohammed estimated that the “first phase” of the project, which will last until 2030, will cost 1.2 trillion Saudi riyals (about US$319 billion).

He mentioned the private sector and an IPO for NEOM scheduled for 2024 as additional potential funding sources beyond government subsidies.

Finding the necessary funding could still be difficult, but conditions are better now than they were during the coronavirus outbreak that drove oil prices down.
However, “demand is tougher to buy, especially when you’re asking people to be part of an experiment on living and working in the future,” as Mogielnicki put it.