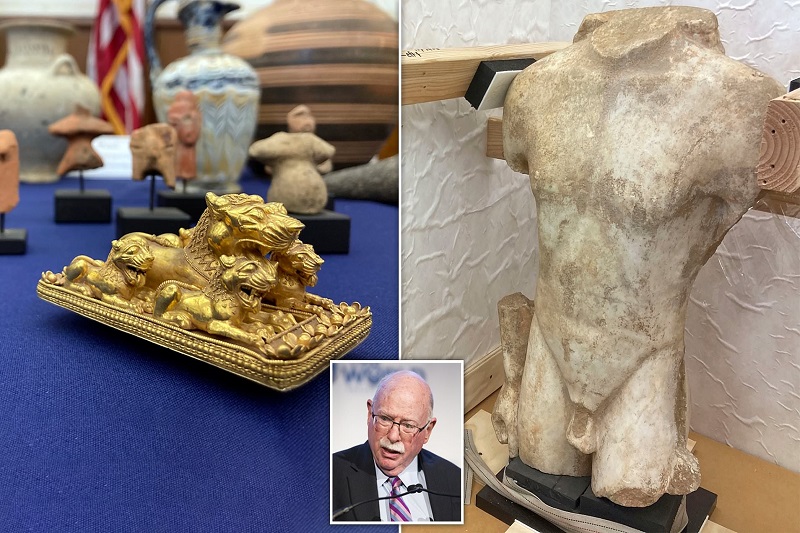 us returns looted artefacts seized from collector to jordan

Jordan has recovered stolen artefacts from the United States, furthering efforts to combat the trafficking of antiquities from the Middle East.

The artefacts were among 180 items clogged in the Manhattan District Attorney’s office. The deal capped a four-year probe into Steinhardt’s possession of looted goods.

According to Petra, the Jordan News Agency, the handover conducted consisted of tombstones, a human statue, stone animal statues from the Stone Age, a bronze jug and a copper altar.

As per the report, the artefacts were recovered from a collector in New York in a joint operation, which was conducted by the New York Homeland Security Investigations Office, the US Department of Homeland Security, and the New York District Attorney’s Office. The Jordanian Ministry of Tourism and Antiquities aided in the operation.

The Minister of Tourism and Antiquities and the American Ambassador in Amman were present in the Jordanian capital, Amman. The handover took place in the General Department of Antiquities building.

Al-Fayez said the cultural and human heritage was considered a heritage for all of humanity and was not restricted to one group. US Ambassador Wooster hailed the event as “historic”, saying it fell within the framework of a bilateral agreement to combat antiquities smuggling.

He said the return of the stolen artefacts to Jordan was an important historical event, as it was the only group of Jordanian antiquities to be restored. He stated that the cultural heritage protection agreement was signed between Jordan and the United States in 2019.

It is pertinent to state that the return of the artefacts comes at a time when western countries and the US have been returning numerous smuggled and stolen antiquities to the Middle East. Last year, Washington returned over 17,000 artefacts to Iraq.