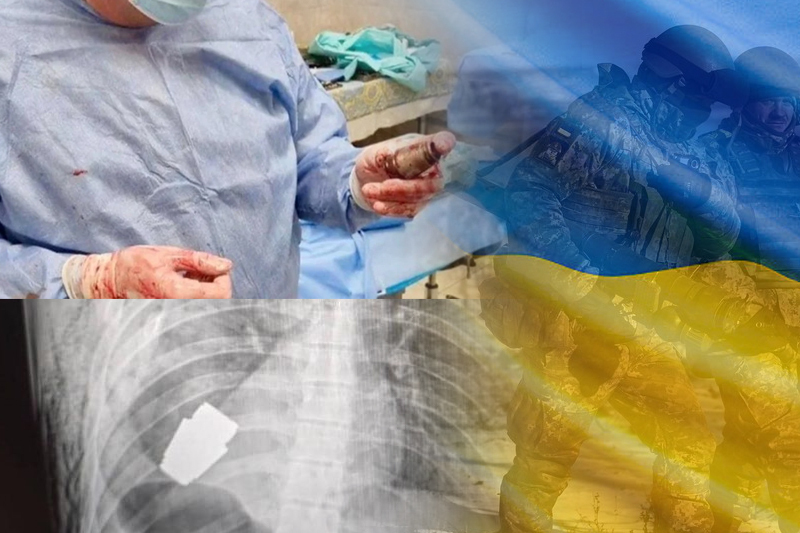 An injured Ukrainian soldier with an unexploded grenade lodged in his chest underwent life-saving surgery, officials in Kyiv revealed Monday. The surgery was full of danger. It was conducted “without electrocoagulation” – a medical treatment that controls bleeding using electricity – as doctors feared the grenade could explode at any time during the operation.

The surgery was successful in extracting the explosive without triggering its detonation and the injured serviceman is now in recovery. The procedure was performed in the presence of two sappers, or military engineers, Ukraine’s Deputy Minister of Defence Hanna Malyar said.

Malyar posted an image on Facebook apparently showing the X-ray image of the soldier’s upper body with the VOG-25 grenade visible, just beneath his heart. These grenades are about four centimeters long, can be fired a distance of up to 400 meters, and were produced in the Soviet era and inducted into service by the Red Army in the 1970s. This may even suggest that Russia has started using Cold War-era munition as its modern shells deplete with extensive use.

According to the post, the delicate extraction was performed by one of the most experienced surgeons of Ukraine’s armed forces, Major General Andrii Verba. Anton Gerashchenko, Ukraine’s internal affairs ministerial adviser, described the procedure as one that would “go down in medical textbooks.”

It is not known when or where the surgery was performed, or how the soldier was wounded.

The war is in its eleventh month now but is still raging on with no sign of slowing down. Hospitals in Ukraine are currently under immense strain. Last month, a surgical team at a specialist trauma hospital was treating almost 100 patients a day under the constant threat of airborne attacks from the nearby Russian-occupied territory.