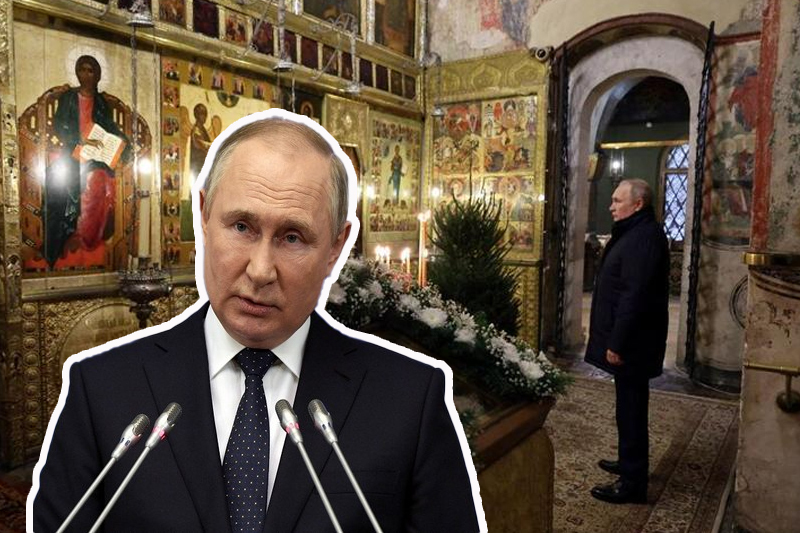 Russian President Vladimir Putin on Saturday praised the Russian Orthodox Church for backing Russian soldiers taking part in what he called a “special military operation”. He also wished Russians who celebrate the Orthodox Christmas holiday “health, success and all the best”. The Kremlin issued Putin’s message after the Russian leader attended a service on his own at the Annunciation Cathedral in the Kremlin on Friday rather than joining other worshippers in a public celebration.

On Thursday, Putin ordered his defence minister to impose a temporary ceasefire in Ukraine for the celebrations. The truce follows a request from Patriarch Kirill of Moscow, head of the Russian Orthodox Church.

It’s considered one of the first major ceasefires of the invasion, now in its 11th month. But when asked to reciprocate, Kyiv rejected the offer as Moscow’s ploy to stop Ukrainian advances and arrange reserves, equipment, and ammunition. The move comes just days after Russia announced one of its worst military losses from a single Ukrainian attack. 89 servicemen, according to Russia, were killed on New Year’s Eve. But Ukraine has challenged the figures, saying nearly 400 were killed in the incident.

US President Joe Biden’s words concerning the ceasefire – “I think he’s trying to find some oxygen” – didn’t please Anatoly Antonov, Russia’s ambassador in Washington. The fate of Ukrainians does not worry the Americans, he said, accusing the US administration of not having any desire for a political settlement.

In other news, the Russian leader was recently accused of hiring “paid actors” to pose as soldiers in his New Year speech. The matter received public attention and interest when a familiar face was spotted by a few eagle-eyed viewers. Putin was even exposed wearing bulletproof vests underneath his suit on that day. Does the deceit suggest his paranoia about appearing in public?