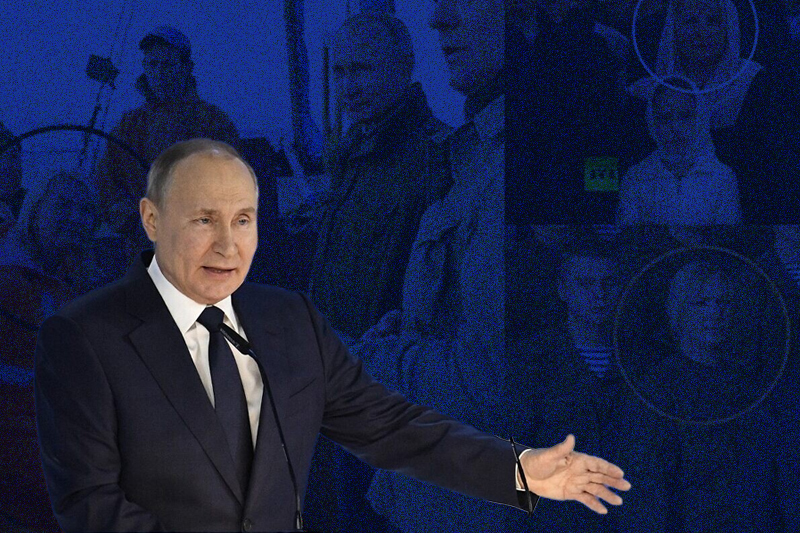 Russian President Vladimir Putin has been accused of using “paid actors” to pose as soldiers, and war heroes in his New Year speech. The matter came under the limelight when a few eagle-eyed viewers spotted a familiar face.

“The blonde woman can also be seen in his Easter address. He’s as fake as the value of the Ruble,” Kyiv Post correspondent Jason Jay Smart said.

The deceit possibly suggests Putin’s paranoia about appearing in public. He has even been exposed wearing body armour underneath his suit for his New Year speech. The Russian leader – reportedly seriously ill with cancer – coughed and spluttered through his nine-minute message.

In other news, Russia sent a drone inscribed with ‘Happy New Year’ as part of a wave of strikes on Ukraine, according to an official. The drone also featured crude drawings of a gift. Andriy Nebytov, the chief of police in Kyiv, said the drone landed in a children’s playground. “This is all you need to know about the terrorist state and its army,” he added.

A Ukrainian New Year’s Eve attack in the occupied city of Makiivka, Donetsk region, has killed 63 Russian troops, Russian officials have confirmed. But Ukraine has contested the figure, saying 400 were killed. Neither claim has been verified. Nevertheless, it is extremely rare for Russia to acknowledge any war casualties.

It’s considered one of the deadliest attacks in the invasion now in its eleventh month. The incident has drawn intense fury, with Russian nationalists and lawmakers demanding punishment for commanders.