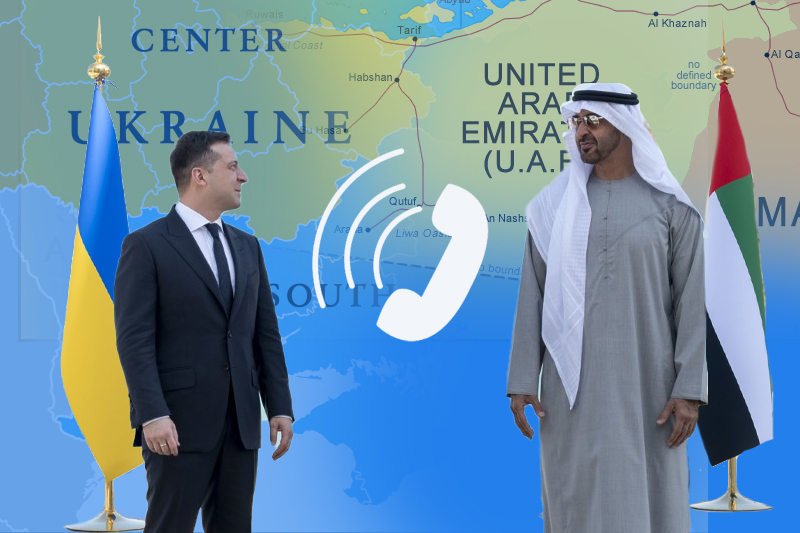 UAE President HH Sheikh Mohamed bin Zayed Al Nahyan on Thursday discussed bilateral relations in a phone call from Ukrainian President Volodymyr Zelensky. The two leaders also reviewed a number of issues of mutual concern and the latest developments in the Ukrainian crisis – in addition to the implementation of the ‘Peace Formula’.

Sheikh Mohamed offered his condolences to Zelensky over the death of Interior Minister Denys Monastyrsky, his first deputy minister, state secretary, and eleven other Ukrainians, including one child, who died in a helicopter crash on 18 January around 08:30 local time (06:30 GMT).

The UAE president underscored the importance of continuing communication and talks to find political solutions to the crisis in Ukraine, in view of the economic and humanitarian repercussion that has impacted the entire world. He highlighted the Emirates’ support for all initiatives aimed at finding a political solution that brings an end to the crisis, in addition to re-establishing peace, security, and stability.

Sheikh Mohamed also emphasised the country’s humanitarian approach, which focuses on providing aid to everyone. Zelensky thanked him for his active role in promoting peace and the UAE’s continued focus on providing humanitarian support to Ukrainians.

In December, the UAE announced its decision to send 2,500 household generators to the war-torn nation to help locals cope with the harsh winter. While the first batch of 1,200 generators reached Ukraine last month, the remaining arrived in Poland earlier this month. The generators each have a power output of between 3.5 and 8 kilowatts, and are expected to bring further warmth to Ukrainian homes after deadly Russian strikes targeted the country’s energy infrastructure and power plants, leaving many homes without electricity.

The support is part of the $100 million humanitarian relief aid allocated by the UAE to the civilians affected by the invasion. The Mideast nation has also dispatched eight planes carrying 360 tonnes of food supplies, medical aid, and ambulances for refugees in Bulgaria, Moldova, and Poland.

The support is in line with the UAE’s belief in the value of humanity, solidarity and empathy, irrespective of region, religion, and diplomatic relations.