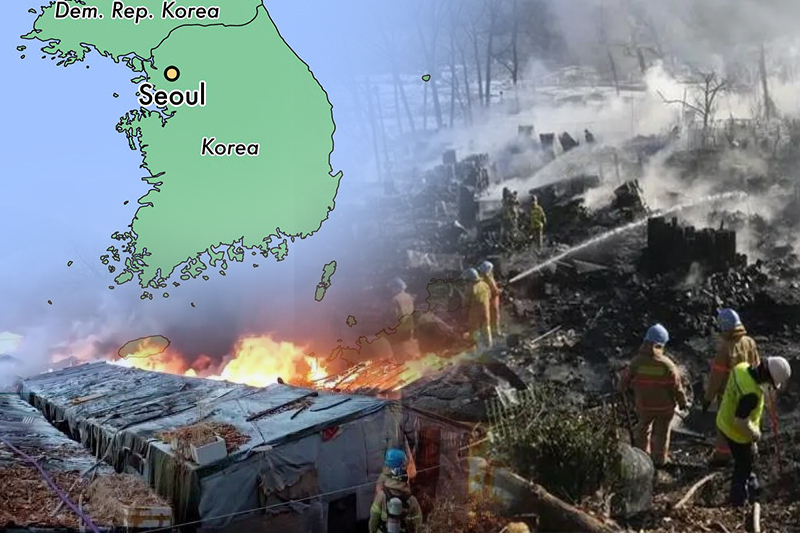 Guryong Village: Massive fire breaks out in one of Seoul's worst-kept secrets

Guryong Village: Massive fire breaks out in one of Seoul’s worst-kept secrets

Around 500 people have had to be evacuated after a massive fire broke out in Guryong Village, one of the last remaining slums in South Korea’s capital, Seoul. There have been no reports of deaths or injuries, but roughly 60 homes are believed to have burned down.

The fire broke out around 6:28 am local time, said Shin Yong-ho, an official with the Gangnam Fire Station, adding first responders arrived around five minutes later. It took over 900 firefighters and several helicopters to finally put out the blaze around 11:50 am.

The exact cause of the fire is still unknown, but authorities have long warned that Guryong residents are at particular risk of disasters. The area has been vulnerable to floods and fires, with most structures – according to Shin – made from vinyl plywood panels. Guryong Village has suffered a minimum of 16 fires since 2009, a report from the Korea Times mentioned. It was also hit hard by flooding last August, when torrential downpours killed at least 13 people in Seoul, including some residents.

South Korean media has described Guryong Village as the capital’s last remaining slum. The area has long been seen as a symbol of the gap between rich and poor in Asia’s fourth-largest economy.

The slum is part of the wealthy, glittering Gangnam district, sometimes called the Beverly Hills of Seoul. It was formed in the 1980s by people evicted from their original neighbourhoods by redevelopment projects the South Korean government had planned ahead of the 1988 Seoul Olympics, the AFP reported.

Efforts to develop the areas have long been prone to disagreements between residents and local governing bodies.

President Yoon Suk-yeol, who is currently in Switzerland for the World Economic Forum summit at Davos, called for all available firefighters to be deployed to the blaze, according to his spokeswoman.