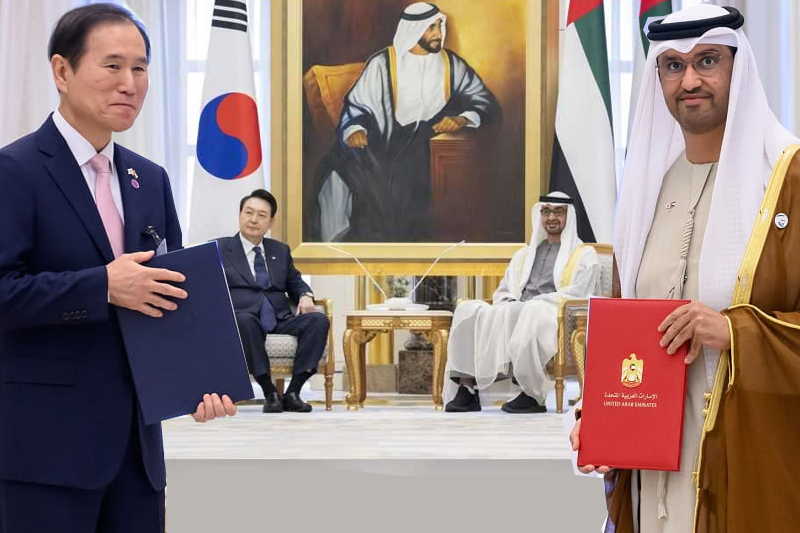 President His Highness Sheikh Mohamed bin Zayed Al Nahyan and Yoon Suk Yeol, President of the Republic of Korea, witnessed the exchanging and announcing of major agreements and Memoranda of Understanding (MoUs) to develop joint cooperation in several fields in light of the special strategic relations that unite the two friendly countries.

This comes as part of a four-day state visit of President Yoon, who met his UAE counterpart on Sunday in Abu Dhabi.

The Emirates has also decided to invest $30 billion in South Korea’s industries, Yoon’s office announced on Sunday. Details of the investment plan were not immediately revealed but according to Kim Eun-hye, Yoon’s press secretary, the investment will be directed at defence, nuclear power, hydrogen and solar energy industries, among others.

The two countries announced several agreements and MoUs, including

The two sides also exchanged agreements and MoUs on

Nevertheless, one of South Korea’s biggest projects remains the $20 billion Barakah nuclear power plant – Seoul’s first attempt to build atomic reactors abroad. The facility is in the UAE’s western deserts near the Saudi border and one day will account for nearly 25% of all of the country’s power needs. It’s also key to the UAE’s plans to go carbon neutral by 2050, a promise that holds special importance now as the country prepares to host the upcoming COP28 climate summit in November.