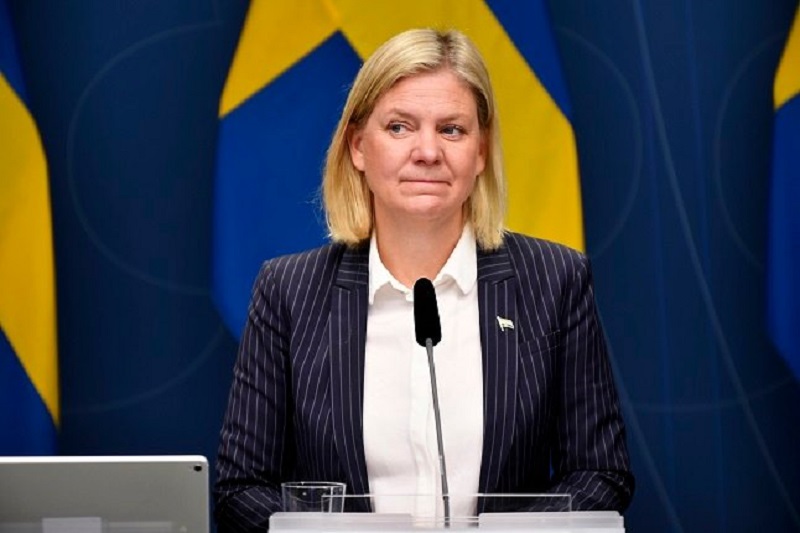 sweden andersson first woman premier for only a few hours

Sweden -A few hours after gaining the confidence of parliament and becoming Sweden’s first female prime minister, Magdalena Andersson resigned after the budget bill failed. “For me, it’s about respect. I don’t want to lead a government where there might be grounds to question its legitimacy,” Andersson said at a press conference after his coalition partner left the government.

Andersson informed the Speaker of the Parliament, Andreas Norlen, that he is still interested in leading a single-led government of the Social Democratic Party. However, she said that “a coalition government should step down if a party chooses to leave the government. Although the parliamentary situation is unchanged, it must be tried again.”

Minister of Finance in office, 54-year-old Andersson, was elected leader of the Social Democrats during the congress held in Gothenburg at the beginning of November, marking a record. However, because of her determination and ability to impose her line, Andersson has been nicknamed “the bulldozer” and often compared to Angela Merkel.

Andersson is the only daughter of Goran Andersson, professor of statistics at Uppsala University, and teacher Birgitta Grunell Andersson. During her high school years, besides being a swimmer at the highest level, she studied social sciences at the Katedralskolan in Uppsala, graduating in 1987. In 1983, Andersson began engagement in politics, becoming part of the Social Democratic Youth League (SSU). Four years later, she was elected president of the local office in Uppsala. She then continued her studies in Stockholm at the School of Economics, where she graduated in 1992 with a Master’s in Economics.

She worked there as a doctoral student in economics from 1992 to 1995, but she stopped her studies after a period at the Vienna Institute of Advanced Studies and Harvard University. From 1996 to 1998, she was Prime Minister Goran Persson’s political advisor, and until 2004 she worked as Director of Planning. Subsequently, she was Secretary of State at the Ministry of Finance for two years before leaving to become political adviser again, this time for the opposition leader Mona Sahlin, from 2007 to 2009. Until 2012 she held the position of Chief Director of the Swedish Revenue Agency, stepping down after her Social Democratic candidacy ahead of the 2014 general elections. Andersson was elected a member of the Riksdag and, in October 2014, was appointed Minister of Finance by the new Prime Minister Stefan Lofven, a position she held for seven years.

One billion children at risk for the climate

Andersson had already presented her government priorities after her election as head of the Social Democrats, saying she was convinced that “Sweden can do better and I know that we must carry Sweden forward.” Climate, resumption of democratic control over the school and health system after a wave of privatizations, the fight against segregation and violent gangs will be at the center of her government action. Furthermore, Andersson’s profile, published on the government website, summarizes her political line and her work: «Creating socially and ecologically sustainable and equally distributed growth is one of the crucial issues of our time. It is also an issue in which Sweden has good prospects of being at the forefront ».

It is an uphill political path marked by the rise of the far-right that is the anti-immigration party of the Swedish Democrats, allied with the Conservative Party led by Ulf Kristersson. For ten years in Sweden, there has been a widespread sense of unease concerning substantial migratory flows, which have been reduced only after a significant crackdown by the Lofven government four years ago. Although gender equality has long been a reality, Sweden is the only Nordic country with a prime minister.