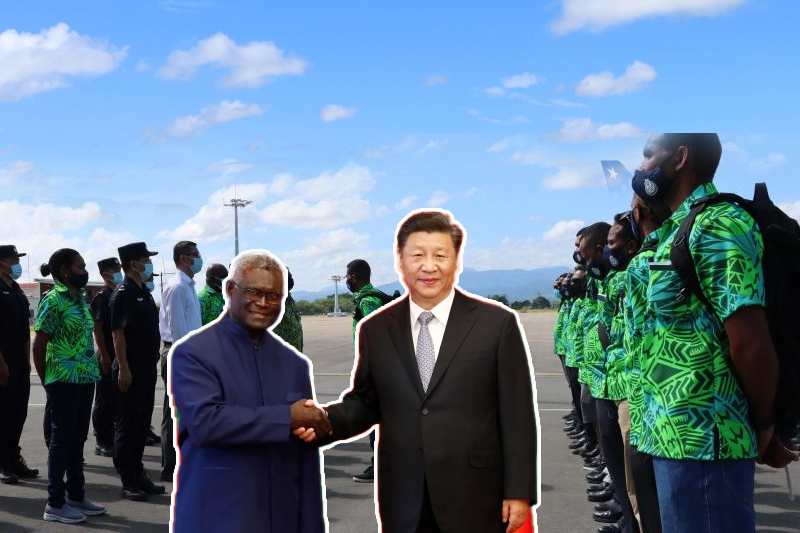 A delegation of more than 30 police officers from Solomon Islands has arrived in China to undergo training, a first event of its kind in a sign indicating deepening ties between the two countries which had entered a controversial security deal earlier this year. The group of 34 officers, that include a deputy and an assistant commissioner, will remain in China for a duration of one month, during a period when they will receive training, visit police stations and departments and learn from the expertise of Chinese police, according to a statement that is issued by Solomon Islands government.

“The officers would also gain a better understanding of Chinese police, diversified Chinese cultures and friendly Chinese people”, said Counsellor Yao Ming, the deputy head of mission at the Chinese embassy in Honiara. He also stressed that this was the first visit by police officers from Solomon Islands to China for purpose of training and added that “after their return, the officers would contribute to better cooperation between RSIPF [Royal Solomon Islands Police Force] and Chinese police, and enhance the friendship between China and Solomon Islands”, according to the statement.

China has been involved in police training and providing equipment to the RSIPF, but according to the government statement, this would be the biggest delegation of RSIPF that would be visiting a foreign country for police training.

According to a leaked draft, there has been an outline of the conditions under which Solomon Islands can call China to send in armed police and military personnel. These conditions included “to assist in maintaining social order, protecting people’s lives and property, providing humanitarian assistance, carrying out disaster response, or providing assistance on other tasks agreed upon by the parties [to the agreement]”.

“In such a fragile, volatile country Chinese policing techniques and tactics that we’ve seen deployed so ruthlessly in Hong Kong, for example, are completely inconsistent with the Pacific way of resolving issues and could incite further instability and violence in the Solomon Islands,” said Andrew Shearer, the director general of Australia’s Office of National Intelligence, expressing the concerns over long term impact of this training.